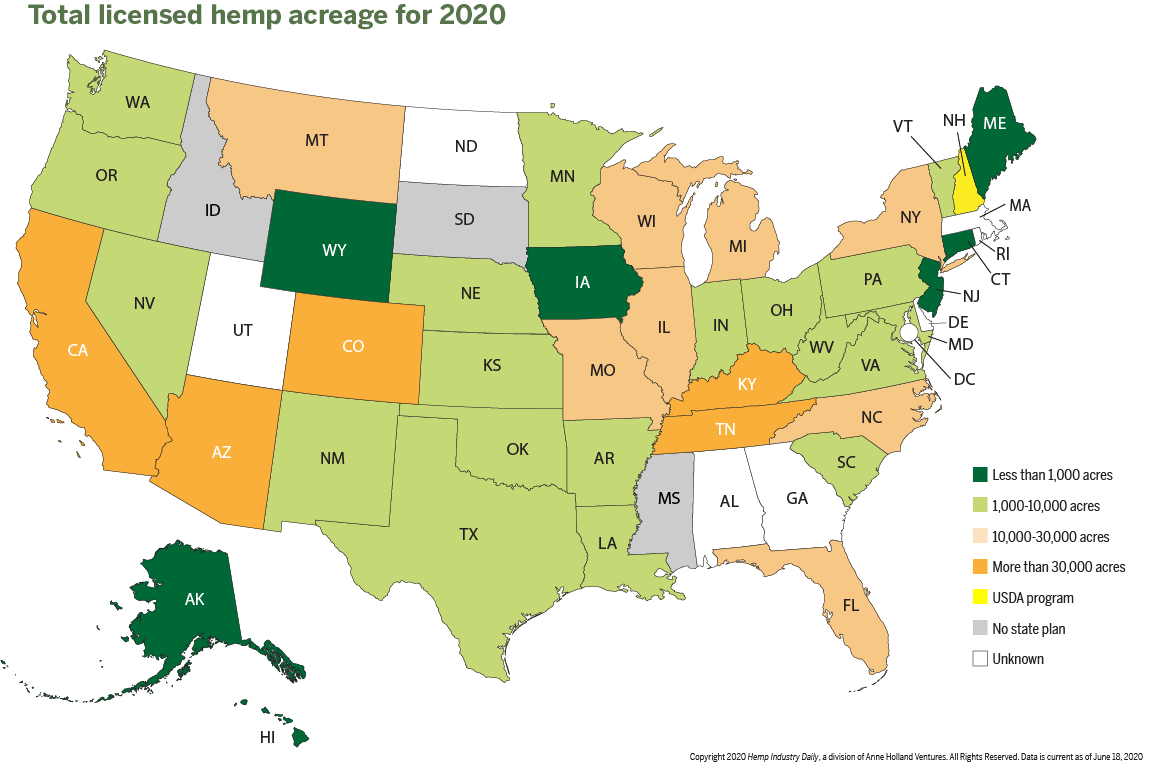 U.S. farmers are planting less hemp than they did last year due to regulatory uncertainty, a surplus of hemp flower and biomass held over from 2019 and continuously falling wholesale prices.

As of Thursday, licensed total hemp acreage to date has reached 465,787 acres for the 2020 production season, with 47 state departments of agriculture reporting numbers to Hemp Industry Daily.

The 2020 licensed acreage is a 9% decrease, compared to 511,442 total licensed acres of hemp across 34 states in 2019, which was more than quadruple the number of acres licensed from 2018, industry advocacy group Vote Hemp reported last fall.

Hemp production acreage in 2020 was projected by many industry insiders to decrease for the first time since 2014, when the 2014 Farm Bill established hemp pilot research programs nationwide.

Even with new hemp states coming online after passing hemp production legislation in 2019 and gaining USDA approval for their state plans, overall acreage numbers to date are down from last year.

Comparatively, the largest 100 greenhouse producers in the U.S. account for just under 220 million square feet of indoor production, according to an annual ranking from Greenhouse Grower, a news publication covering the sector.

Seven states didn’t have acreage numbers ready yet and several said that their numbers are not final, as growers continue to apply for licenses.

One state, New Hampshire, has producers growing under U.S. Department of Agriculture jurisdiction. A spokesman for the agency told Hemp Industry Daily that the USDA has issued five licenses to producers in the state.

States that track and require processor licenses have granted 4,485 processor-handlers licenses. However, several states said they don’t require licenses for processors, so there is much greater processing capacity within the U.S. that is currently unaccounted for.

States that have led the nation in hemp production since 2014 have seen a marked decrease in licensed acreage. Of the top 10 hemp states by acreage licensed in 2018, only two – New York and North Carolina – have increased licensed acres and registered growers. Consider:

Notable licensing numbers for this year in new and relatively young hemp states indicate grower enthusiasm for the new crop including:

The state of Missouri tracks this in its pre-season numbers. Although it licensed 21,000 acres, the state also asks for planned acreage and square footage, saying most growers license more land to grow on but don’t typically plant more than their reported planned acreage. And it’s a big difference – growers in Missouri said they plan to produce 3,892 total acres this season.

If more states provided this distinction, it would give the industry a more accurate picture of actual planted acres at the beginning of the season.

“Licensing is a good indicator to show intent, but we know from previous years that significantly less hemp is planted than what is licensed due to a variety of factors, including access to seed and clones, a lack of financing as well as inexperience,” said Vote Hemp president Eric Steenstra.

But according to Colorado-based research firm The Jacobsen, that data was skewed because tens of thousands of acres went unreported in states like Oregon and Colorado, accounting for new farmers and cannabis growers, who didn’t have a relationship with the FSA.

In 2020, acreage reporting to the FSA is compulsory as part of the USDA’s interim final rule and the agency will also record intended use including fiber, grain, seed or cannabinoid production, said senior hemp analyst Chase Hubbard in The Jacobsen’s 2020 U.S. Hemp Crop Outlook released in May.

In the report, The Jacobsen projected planted hemp acreage for this year will be 157,082 acres.

Harvested numbers are a much different story, as the number of harvested acres in 2019 were likely half of what was planted, according to Vote Hemp.

Based on The Jacobsen’s May 2020 production survey, the bulk of the 2020 crop, 79.4%, will be dedicated to cannabinoid production, with 14.5% focused on CBG-dominant genetics. The survey showed 2.5% of 2020 acreage would be planted for fiber varieties and 3.6% for grain.

According to Hemp Industry Daily’s 2019 Hemp & CBD Factbook, 94% of producers grew flower varieties for cannabinoid production last year, while 10% focused on seed and grain varieties and 11% grew for fiber and stalks.

Prior to COVID-19, Steenstra of Vote Hemp predicted during the Industrial Hemp Summit in February that more farmers will begin growing grain or dual use hemp crops.

A growing interest in fiber and grain varieties is showing, according to Andrew Bish, CEO of Hemp HarvestWorks, who said Tuesday that he has received more inquiries about harvesting equipment for grain and fiber hemp from producers this year, than in previous years.

However, no matter what growers decide to plant, planning is the key to success, said Mark Reinders, CEO of HempFlax and president of the European Industrial Hemp Association.

“The total crop valuation only works if the whole infrastructure is in place. … Start with your market and then work backward to the crop, but please do not plant any seeds without any planning because you will lose money.”