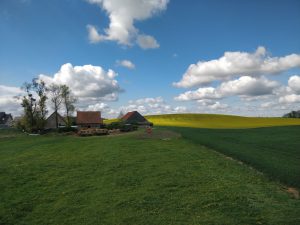 (Editor’s note: This is the first of a series of national snapshots on Europe’s complex hemp industry. To learn more about hemp production and opportunities elsewhere in Europe, download our free “Hemp Cultivation In Europe” report here.)

Despite being overshadowed by the output of France’s hemp farmers and the heft of Germany’s consumer buying power, Poland stands out as a key player among Europe’s hemp markets.

Polish farmers nearly doubled the area they cultivated for hemp last year, and the country has developed a reputation as a European hub for CBD processing due to the growth of small extraction operations.

But entrepreneurs across the entire hemp supply chain are balancing booming market demand for hemp products against nagging legal uncertainty.

Polish law remains ambiguous on the THC threshold for hemp after harvest and for final products, leaving farmers, processors and retailers the mercy of local police trying to enforce narcotics law.

The high-risk regulatory environment aside, hemp cultivation for CBD remains a mainstay for the Polish market.

The figure is based on the area declared by farmers who received an EU subsidy.

The number of hectares of hemp being cultivated in Poland has steadily increased since 2015, the year that farmers were first eligible to apply for EU aid, according to a recent report from the Polityka Insight research group.

In 2018, Poland ranked seventh among European nations for hemp acreage, according to the European Industrial Hemp Association.

Before Polish farmers can sow certified seeds, one of the two following conditions must be met:

If authorities come to inspect the crop, “they need to know who will be the buyer,” Czerniak said. “It doesn’t mean the company needs to be the ultimate buyer, but they need paperwork showing the potential buyer.”

The vast majority of hemp farmers sell hemp flower for CBD production, while a smaller number cultivate hemp for seed.

Almost no farmers in Poland cultivate hemp for fiber, but most will collect what remains in the field after harvesting the flower or seed and sell it as short fiber, mainly to the construction and automotive sectors and to other farmers for straw mulch. 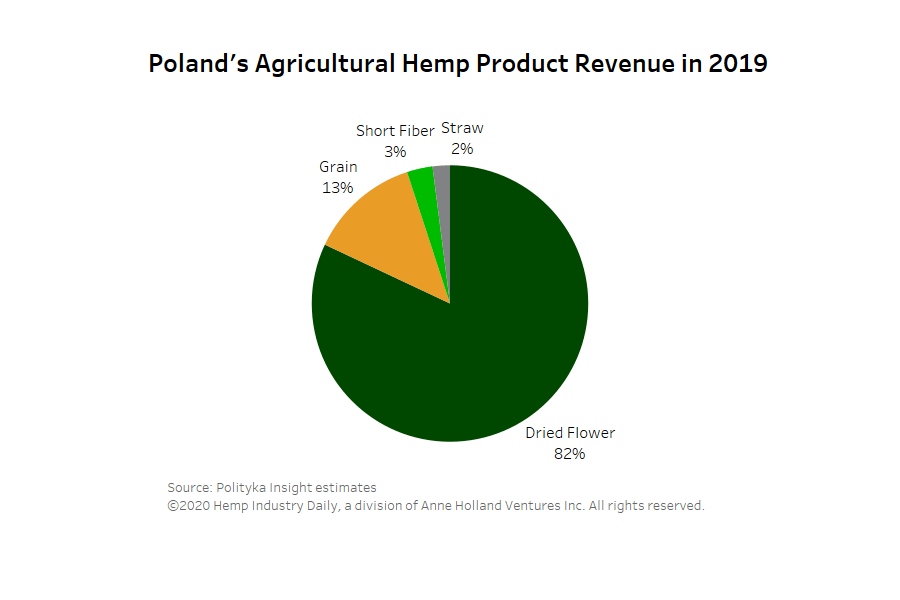 The regulatory landscape for hemp cultivation and processing in Poland is fragmented due to overlap between country’s Drug Prevention Act and the Food and Nutrition Safety Act in regulating cannabis. This simultaneously gives authority to the Health, Interior, Justice and Agriculture Ministries and creates inconsistencies in state policy.

Polish regulations do not specify how to treat the 0.2% THC limit for crops after harvest, when the separation of the seeds, fiber and flowers can lead to higher THC levels. This means authorities have a great deal of discretion in interpreting the law and deciding whether growers or processors are in breach of the law.

“It’s very problematic to manufacture and grow hemp in Poland, because the police can easily block your business,” Czerniak said.

Cultivating hemp in Poland carries high risk as a result – something that has kept companies on the Polish market small. Two thirds of the revenues netted for CBD production in Poland were netted by so-called micro companies with fewer than 10 employees, according Polityka Insight estimates.

According to Czerniak, small growers and processors whose operations have been shut down by the police are flexible enough to establish a new company and restart production in a relatively short timeframe.

“When their business is completely or temporarily shut down as a result of an administrative decision, these entrepreneurs can quickly declare bankruptcy and start a new mirror company immediately, without any major losses [and] without actually interrupting the processing process,” the report said.

According to the report, Poland’s industrial hemp processing market is fragmented and consists of a few larger companies – most with foreign capital – and of many smaller operations fewer than 10 employees.

The biggest grower in the country is HemPoland – a subsidiary of Canada’s The Green Organic Dutchman. HemPoland helped produce the Polityka Insight report.

CBD-related processing and food production from cannabis seeds remain the most popular and lucrative sectors; other hemp-related sectors are poorly developed, “mainly due to the lack of access to locally produced hemp raw materials,” the report said.

“The market for CBD is growing at a very fast rate, and there are a lot of small Polish enterprises that were created in the last couple of years that are producing CBD mainly for foreign companies,” Czerniak said.

The price for Polish hemp flower differs depending on CBD content, according to Jacek Kramarz, director of business development at HemPoland and a board member at the European Industrial Hemp Association.

CBD manufacturing in Poland, encompassing oils, cosmetics and food, stood at around 218 million zloty ($58.7 million) last year, Polityka Insight estimates. HemPoland is estimated to have about 15-20% of the market. 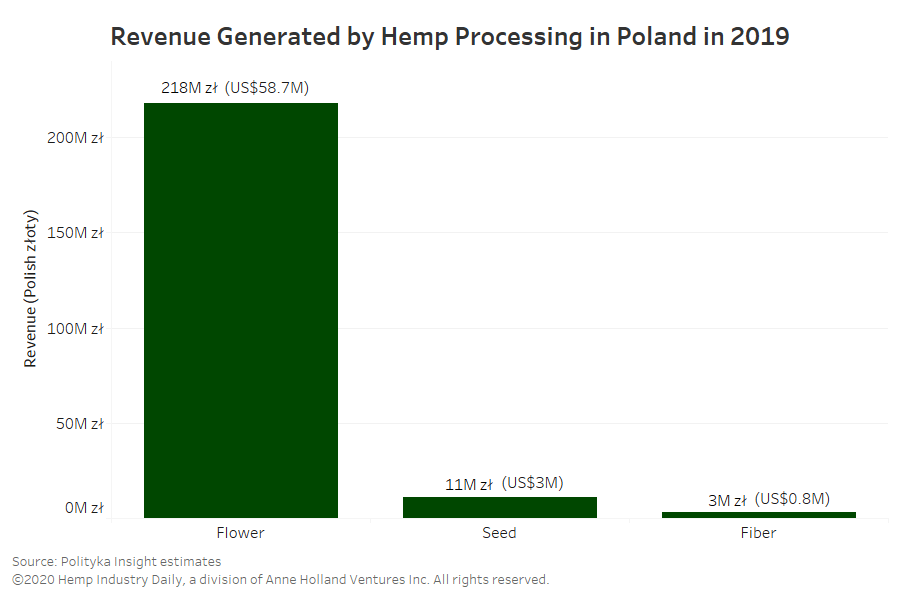 Poland imported about 1,200 tons of raw biomass to produce CBD extracts last year, most of which came from Lithuania, France, Germany and Kazakhstan, according to the Polityka Insight analysis.

“This is due to a very absorbent internal market,” the report noted. “In Poland there are large producers of CBD-containing products and a large group of small processors.”

According to the Polityka Insight report, the use of CO2 extraction – commonly used to remove caffeine from coffee – means that CBD extracts can be generated by small food processing plants. This has “significantly reduced the technological barrier for entering the CBD production market” and led to the emergence on the Polish market of a “very large group of micro companies dealing with CBD extraction.”

Online distribution remains the leading way to sell CBD products in Poland, Czerniak said. Some retailers have started carrying CBD-containing hemp products on their shelves – but here too there is the risk of law enforcement intervention.

If products have a THC level at above 0.2%, “the Polish buyer or retailer can be prosecuted,” Czerniak said.

As European consumers shy away from in-person shopping at brick-and-mortar stores due to persisting anxiety about Covid-19, companies like HemPoland have indicated they will continue to rely on online retail for their CBD products.

Canada’s The Green Organic Dutchman, which acquired HemPoland in 2018, told investors recently that HemPoland “is reworking its online sales capabilities to ship products direct to consumer, where applicable, to combat the expected lack of foot traffic in retail locations.”

As in the United States, the future of CBD in Poland depends largely on how the government addresses the regulatory risks that currently accompany the cultivation, processing and sale of hemp products.

Polityka Insight forecasts that, if Polish legislation remains unchanged and farmers and processors continue to face the risk of crop seizures, product recalls or store closures, “the vast majority of companies in the industry will remain micro-enterprises” and “their owners will choose not to make investments, especially in modern technologies.”

In this status-quo scenario, it is unlikely that hemp cultivation or Polish CBD production will achieve the levels that might be achieved with a change in legal policy – relaxing the THC limit for farmers who face drought conditions and therefore running a hot crop, for example.

Before Poland changes its own cannabis legislation, Poland and other hemp-producing nations in Europe will likely wait for a bigger shoe to drop: whether the European Commission officially declares hemp-derived cannabidiol a narcotic.