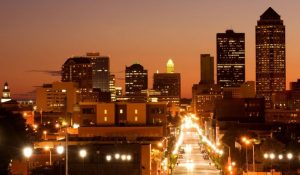 On one hand, Iowa has gone to great lengths to say that it will allow only cannabidiol products, not THC goods.

On the other hand, MedPharm Iowa is growing cannabis that federal law would consider marijuana, not hemp.

And one of the company’s first products – a capsule containing 20 milligrams of THC – contains too much THC for a single serving to be legal in Colorado’s recreational market.

Edibles are banned under an Iowa law that calls the products cannabidiol, not medical marijuana, even though they’re derived from marijuana plants.

Nelson is frustrated by statements from Iowa officials such as Sarah Reisetter, the deputy director of the Iowa Department of Public Health.

MedPharm Iowa owns two of the state’s five dispensaries and is the only licensed grower with products ready for sale. A second grower has been licensed but doesn’t yet have products ready.

“We are growing marijuana,” he said. “Nothing here would be considered hemp.”

The state has about 1,000 qualified patients, and he is hoping the state’s slow rollout will give MedPharm Iowa a market advantage if opportunities expand.

“I don’t think we can overstate how important this is to our state,” Nelson said.

“We had the whole battle over whether cannabis could really be helping people, to putting a limited program in place. It’s progress.”