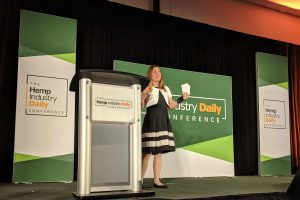 Hemp is technically legal in the United States, but the industry has a long way to go before the market truly develops.

“It’s great to be immature!” she said.

Mature markets tend to be dominated by three major competitors, but a young industry has more opportunity to define its direction before behemoth companies dominate the market.

Many hoops that need to be jumped through, though – not the least of which is finalizing a federal framework under the 2018 Farm Bill.

“There is a lot of regulatory action needed before a compliant market can come into being,” said Michael Bronstein, president of the American Trade Association for Cannabis and Hemp.

But the industry isn’t waiting.

“The hemp industry reminds us a lot of where the marijuana industry was five years ago,” Chris Walsh, president of Marijuana Business Daily, which is hosting the hemp conference, said during his general-session address, “10 Trends to Watch This Year and Beyond.”

“When we get together in three years, there may be 10,000 people at the hemp conference.”

While interest in CBD still dominates many of the conversations around hemp, research and development is ongoing in other industrial uses, from construction materials to textiles.

“There are so many applications you never thought possible,” Nichols said.

If hemp products are going to be sold in supermarkets, where and how will they be sold?

That question was posed by Anat Baron, CEO of Stashwall and former executive at Mike’s Hard Lemonade, who delivered the keynote Wednesday.

“Will it be an aisle, like gluten free at Whole Foods? Or will there be cannabis products on every aisle next to every product?” she asked.

But it’s important to understand who your customer is and how they want to be reached.

That information should drive all your business decisions, Baron said.

“If you don’t know who your customer is,” she added, “stop what you’re doing and figure it out.”