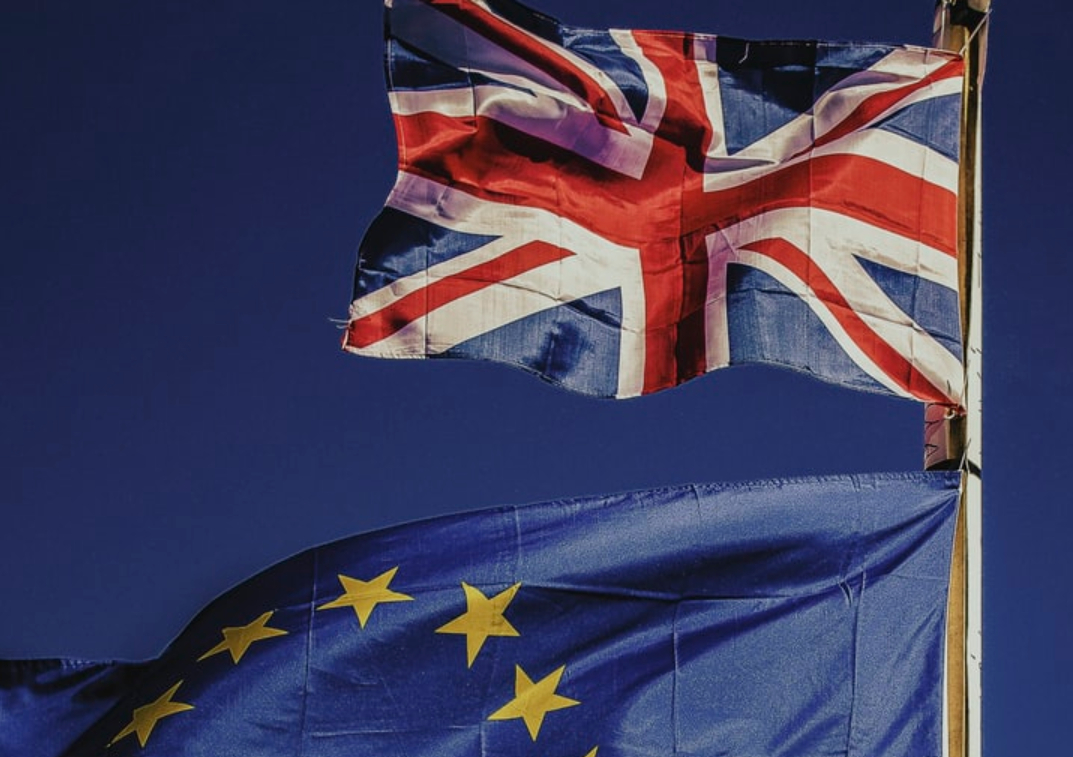 If the CBD market is any indication of how other sectors will be affected by the United Kingdom’s divorce from the European Union, buckle your seatbelts.

Supply-chain slowdowns and lockdowns due to the Covid-19 pandemic have already made doing business in the UK a challenge.

Under the latest Brexit trade deal, though, shipping, customs, tariffs and novel food regulations are a lot more complicated – not just for UK CBD makers, but also suppliers in the United States and mainland Europe and anyone hoping to sell to UK customers.

When the UK was part of the European Union, it enjoyed the free movement of goods with other EU member states. This helped foster a growing CBD market in Britain despite domestic legislation that bans hemp growers from using the plant’s flowering tops.

At least 700 CBD companies are currently active on the UK market, but pinning down the market’s value is more of a challenge. A recent survey by the UK CBD marketplace Alphagreen suggested that 15% of Brits had used CBD in the first four months of 2020, and that CBD consumer spending during that period exceeded £150 million ($205 million).

The outlook for CBD is less cheery in the post-Brexit reality, though, as UK businesses and their international partners have to navigate new customs declarations, forms, shipping delays and three different novel food authorization schemes.

For some companies, these new points of friction are straining supply chain relationships and creating extra costs that will need to be passed on to the consumer.

CBD companies worry that “products coming in from Europe will be held up unnecessarily or jammed in the system in some way,” Kyle Esplin, chair of the Scottish Hemp Association, told Hemp Industry Daily.

Shipping companies and border authorities have long had an inconsistent approach to CBD products, he said, “and Brexit is only likely to compound that issue.”

That’s been the experience of ThreeDots, a London-based company that sells sparkling CBD beverages in 250 stores in the UK but manufactures them in Austria.

Brexit-related snags in the company’s supply chain have hit both CBD and non-CBD ingredients, which it sources from the United States, Europe and the UK, co-founder Sean McLintock told Hemp Industry Daily.

A shipment of ThreeDots’ basil extract, for example, has been held up at UK customs for more than three weeks, and authorities only provided an explanation in the last few days.

“They’re not clear on the paperwork required for an export to Austria,” McLintock said.

Robert Jappie, partner at the INCE law firm in London, said customs declarations will be the major source of headaches under the current post-Brexit trade deal.

He pointed to transport trucks being held up or turned away at the UK border because they lack the proper documents.

“A lot of EU companies are saying, ‘Look, we just don’t have the time to fill out all these forms. It’s not cost-effective for us to do it,'” Jappie said.

The risk? Some UK companies might be forced to drop their ingredient suppliers in mainland Europe and look elsewhere to avoid any extra hassle.

On the CBD side, ThreeDots’ McLintock has also been frustrated by “much stricter regulation” from Austrian authorities on UK imports beginning in the second half of last year, with customs withholding products for excessive amounts of time on two occasions.

“In the first instance, they actually took over a kilogram of samples to do testing, which, as I’m sure you can imagine, is extremely expensive for us,” McLintock said.

Because ThreeDots’ CBD is sourced from the United States, the issue may lie with the so-called rules of origin, which dictate that a product must contain a certain percentage of content “predominantly produced” in the UK in order to benefit from preferential tariffs.

Companies that simply import CBD isolate from the United States, for example, slap a label on it and export it into mainland Europe violate these rules.

“You can’t have a situation where I import product from the States into the UK, and I just try and sell that product directly into the European Union,” said Stephen Oliver, co-founder of The Canna Consultants in London. “That will be where there are potential pitfalls for companies.”

When it comes to trade with the United States, a deal still needs to be worked out between London and Washington, but analysts expect the tariffs situation to remain unchanged for U.S. CBD exports to the UK – at least for now.

“I don’t think you’re going to see somebody who’s importing isolate from the States into the UK and all of a sudden there’s going to be an increase in the tariff or the duty rate for them,” Oliver said.

Cannabis products are not classified under the current tariff rating system, so companies importing and exporting them need to seek out other categories – terpene extractions, for example – in order to assess the tariff duties.

“What it’s really meant for us now is we have to re-look at our supply chain,” McLintock said. Brexit, he said, has created “a breakdown in a really free trade system, which has so many knock-on effects for us.”

Beyond this new web of international trade barriers, Brexit has also created three regulatory regimes for CBD, each with a different set of characters overseeing and enforcing so-called ‘novel food’ regulations across the UK.

The UK created a special deadline last year to clean up the CBD market and bring manufactures into compliance with novel food rules, which require some food ingredients to get extensive testing and approval from food safety authorities before they can be sold to consumers.

Novel food regulations have applied to hemp-derived CBD ingestibles in the European Union for two years, but they were largely ignored by manufacturers in the UK.

In an effort to cull the unwieldy CBD market, London’s Food Standards Agency said manufacturers had until March 31 to submit a novel food application if they wanted to stay on the shelves.

The FSA deadline came with a few strings attached. First, products that hit the UK market after February 2020 are exempt from the special treatment: Market newcomers need to get full authorization from authorities – a process that can take months, if not years.

Another caveat: The deadline applies to sales in England and Wales – but not Northern Ireland and Scotland. That’s because the novel foods issue in the UK under the post-Brexit trade deal has been complicated by the Northern Ireland-Republic of Ireland border and Scotland’s pro-EU politics. 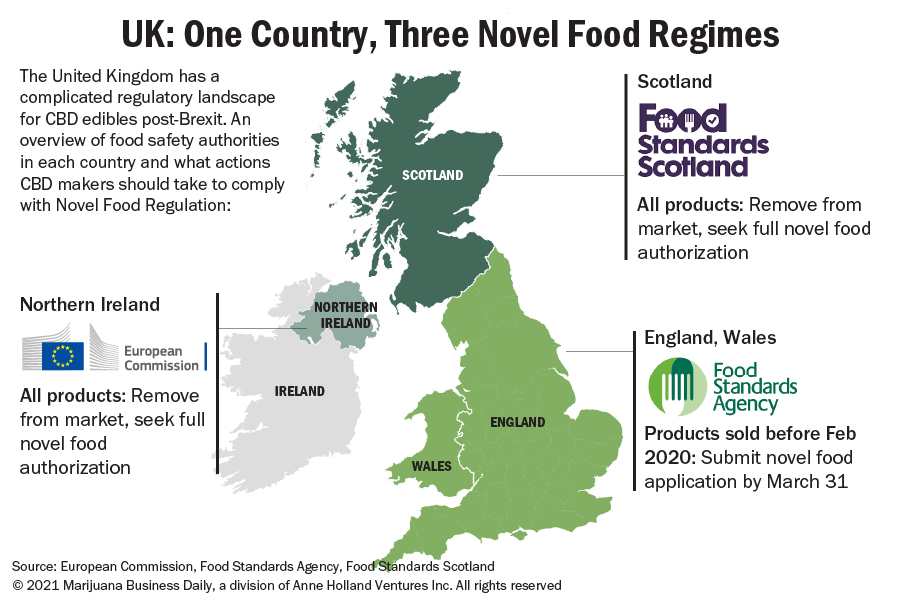 Novel food regulation in the UK has been made more complicated by the question of the post-Brexit UK-EU border.

Northern Ireland is part of the UK. But its neighbor, the Republic of Ireland, remains a member of the EU.

In order to avoid the political firestorm of a hard border between the two neighbors, the UK and the European Union agreed to have EU law apply to Northern Ireland post-Brexit.

This means the UK’s looming CBD deadline does not apply to products on the Northern Irish market, and no lawful sale of CBD products can currently take place in Northern Ireland unless a product has full novel food authorization from the EU.

“Novel food applicants in Northern Ireland … have to submit their application for authorization to the European Commission,” an EU spokesperson told Hemp Industry Daily.

In practice, some CBD products that are allowed to stay on the market in England and Wales should be pulled from shelves in Northern Ireland and Scotland.

Trade will also become an issue. With the UK-EU border now moved to the Irish Sea and Northern Ireland effectively becoming part of the EU, British companies exporting into Northern Ireland will need to fill out customs declarations.

Border issues get more complicated for companies in Ireland whose imports normally get shipped from the UK to Northern Ireland and then southward across the border.

“There are so many different layers to it that it just becomes incredibly complex, and it’s going to take a while for these complexities to be resolved,” Jappie said.

The CBD landscape is just as complicated when it comes to Scotland.

Scotland is part of the United Kingdom, but its government has authority over several domestic policies, and food safety is one of them.

Food Standards Scotland, an agency similar to the UK’s FSA, has opted stay the course with the EU’s authorization-only scheme for CBD products rather than use the March 31 deadline that applies to England and Wales.

Just like in Northern Ireland, no CBD products are allowed on shelves without novel food authorization, according to Food Standards Scotland.

“We expect businesses selling novel foods to move towards compliance as a matter of urgency, by lodging an application for authorization of a novel food as soon as possible,” the agency told Hemp Industry Daily. According to FSS, local authorities are responsible for enforcing novel food compliance.

According to Esplin at the Scottish Hemp Association, authorities in Scotland have agreed to not start checking CBD products for novel food authorization – yet. The group is due to meet with FSS officials again to discuss the question in March.