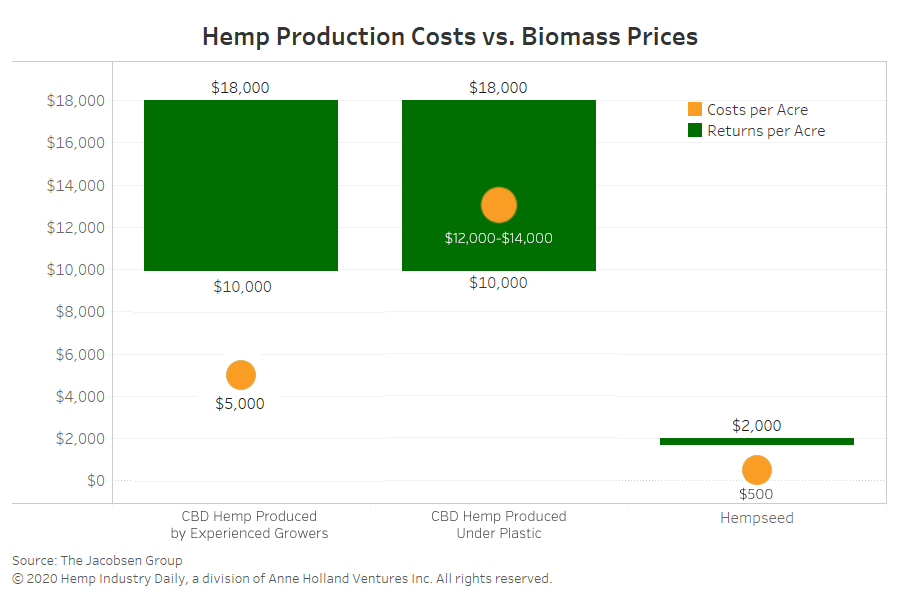 Hemp production in 2019 wasn’t as simple or as profitable as many growers anticipated, as production costs far outpaced profits in most cases.

Many traditional farmers who added the crop in 2019 expected to grow it fast and furious like other commodities. Many who used existing equipment found hemp to be tricky to plant and harvest mechanically, causing them to rely on – and pay for – harvesting by hand.

According to The Jacobsen, a Boulder, Colorado-based firm that tracks commodity prices and trends, hemp production costs continue to be a moving target, as many states only have a year or two of data, and production methods vary widely in the nascent industry.

Conversely, experienced operators were able to produce hemp flower and biomass crops for approximately $5,000 per acre – a decent target for the commodity market, though the craft flower niche may be able to command more, according to Jacobsen senior hemp analyst Chase Hubbard.

The Jacobsen surveyed hemp farmers across the U.S. to deduce production numbers from the 2019 season, comparing those to its ongoing hemp pricing reports and market forecasting.

Without the consistency that develops in production practices and costs over time for an agricultural commodity, producers’ budgets likely didn’t cover all production expenses, Hubbard said.

“On the income side, producers high-graded their crops for the flower market, realizing tens of thousands of dollars in additional returns for 300 to 500 pounds of desirable flower,” he said. “This isn’t found in current university budgets, nor are the full labor costs for new producers.”

Comparing flower and biomass to hempseed production costs of $500 per acre, a harvest of 1,800 pounds per acre may offer a gross return of $2,000, according to The Jacobsen’s pricing data.

“Costs are lower as acreage increases, and some operators will be more profitable, as with all commodities,” Hubbard said.

“Diversified operators with precision farming technology can optimize inputs and yields, and with yields over 2,200 lbs/acre, can net over $2,000 per acre,” he added.

Next to commodities like corn and soybeans, which are showing a projected loss this year at $20-$50 per acre, hempseed grain production looks attractive but could cause an oversupply of hemp grain, Hubbard said.

“Conventional yields of 2,000 lbs/acre are also attractive, at our published pricing, netting over $500,” he said.