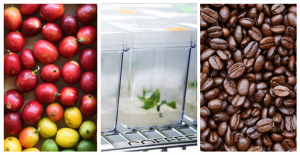 As traditional agricultural firms increasingly wade into the hemp and marijuana markets, one Colorado cannabis biotech firm is going the opposite direction.

Now the company is branching into coffee production, planning to use the technology it perfected on cannabis to create tissue cultures for a boutique California coffee grower, Frinj Coffee.

“There’s a big market opportunity here,” Front Range CEO Jonathan Vaught said. “As we solve problems for the cannabis industry, there are opportunities in other crops.”

Terms of the deal with the coffee company haven’t been finalized, but Vaught says Front Range plans to produce the coffee tissue cultures in Southern California, where there’s a small but growing number of specialty coffee growers.

Coffee is a much newer crop for California than marijuana, but both are considered labor-intensive to raise and very profitable when their quality is high.

Coffee production in the United States has traditionally been limited to Hawaii, which last year produced more than 36 million pounds of coffee cherry (the fruit that contains coffee beans).

Most of the world’s coffee production – about 20 billion pounds each year – comes from tropical nations in Latin American and Asia.

But climate change appears to be threatening coffee production in the tropical highlands from Sumatra to Brazil, just as California avocado growers are seeing declining yields and profitability.

About 15 years ago, some California avocado growers started experimenting with coffee for high-end specialty markets.

According to the University of California’s Division of Agriculture and Natural Resources, the state now has 30 coffee farms growing more than 30,000 coffee trees, with at least two dozen more farms expected to start growing coffee in 2018.

“Production will double or triple each year for the next few years, but demand will outpace even that.”

Specialty coffee prices vary widely because the crop is so new, but farmers report prices of $60 to even $600 a pound (compared with about 57 cents per pound for avocados), according to the University of California.

Cannabis and coffee came together last year when Vaught was introduced to coffee growers at the University of California, Davis, where Front Range funds cannabis genome research.

“Whether it’s cannabis, coffee, cacao, anything, they seem to have a good system,” said Ruskey, who wasn’t deterred by Front Range’s origin in the cannabis industry.

“They satisfy our strict criteria for propagation that’s independent of what they’re doing today,” he said.

Front Range says it plans to work on cannabis-tissue culture in California, too, but plans aren’t finalized.

At the same time, Vaught said his company plans to explore other crops suited to high-end tissue culture products, such as berries or pineapple.

“We formed (Front Range Biosciences) with a vision of being an agricultural company, not just a cannabis company,” Vaught said. “There’s a lot of agriculture out there besides cannabis.”