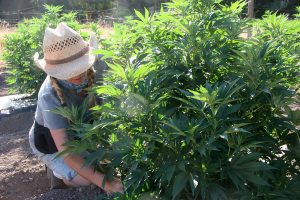 Cross-pollination remains a threat to hemp and marijuana farmers, no matter how much care they take to prevent the situation. (Photo courtesy of Sam Robison)

(A version of this story appeared earlier at Marijuana Business Daily.)

Outdoor marijuana and hemp farmers are increasingly coming to loggerheads over pollen drift, setting the stage for growing disputes in areas with thriving outdoor cannabis production.

Marijuana growers say that cross-pollination from hemp farms can cost them thousands because it can render flower products unmarketable.

Morf said his problems started this year, after Washington’s governor signed a law that abolished the mandated 4-mile buffer between outdoor marijuana and hemp farms.

The law was intended to open up Washington state to hemp production after passage of the 2018 Farm Bill, but the buffer change led to disputes between hemp and marijuana cultivators.

Morf expects to lose about $40,000 this year after his 600-plant farm was cross-pollinated by male plants he said came from a nearby hemp farm.

As a result, marijuana and CBD producers take great care to avoid males. Most marijuana in commercial production is sinsemilla, Spanish for “without seeds.”

But even careful marijuana producers can find their work foiled by pollen drift from crops that haven’t been sexed.

According to researchers at Michigan State University, a single male cannabis flower can produce 350,000 pollen grains capable of traveling great distances in the wind.

Concerns that unsexed hemp crops could reduce THC content in neighboring marijuana crops has led to sharp debates over whether outdoor hemp and marijuana can co-exist. The dilemma is a major reason why marijuana pioneer California has been slow to develop a hemp industry.

The passage of the 2018 Farm Bill prompted many farmers to try cashing in on the CBD trend by growing CBD-rich hemp. These hemp producers also look to avoid male plants – but unstable genetics and a flood of inexperienced cannabis producers has led to many cases of unsexed hemp crops low in cannabinoid content.

According to Colorado seed breeder Wendy Mosher, president and CEO of New West Genetics, a grower will lose about 1% of total cannabinoid content if a field is cross-pollinated.

She said that cross-pollination is also happening to hemp-based CBD farms in Colorado, with farmers at a loss to locate the cause.

According to Morf, his marijuana flower is full of seeds, reducing the usable volume and the overall quality.

He won’t be able to sell it on the wholesale or retail flower market and anticipates taking a financial hit by selling it all for extraction.

Morf has grown marijuana for three years “out in the middle of nowhere” with no other cannabis cultivators for 30 miles.

This year, when the buffer was removed, a hemp grower leased the land across the road but assured Morf the plants would be females grown from clones.

Morf has contacted local and state politicians and state marijuana regulators but found no recourse.

Morf pointed out that Washington’s marijuana tracking system will show that he planted all from female clones.

“We’ve gone through three years of growing, and the most I’ve seen is a female plant with one bud ‘herming’ off a stem last year,” he added.

“Herming,” or “hermaphroditing,” refers to a cannabis plant developing both male and female flowers.

Morf has considered suing, but he figures it’s not worth the cost.

A similar situation is arising in Oregon.

Pete Gendron, a grower in Sunny Valley and president of the Oregon SunGrowers Guild, estimated cross-pollination is affecting roughly 8% of the state’s marijuana production.

That’s largely because the number of licensed hemp acres increased this year by about 500%.

Gendron’s advice to marijuana growers: Buy seed from a reputable provider and try to make sure your hemp-growing neighbors are flower producers using feminized seeds.

Tell them “if you pollinate me, you’re going to be pollinating yourself, too,” Gendron said.

“It won’t save you from field walking,” he added, meaning that growers still need to check to ensure their plants haven’t hermed or that no male plants have grown from seed.

“It really only takes one (male) to ruin your day,” he said.

In an attempt to address the cross-pollination issue, the U.S. Department of Agriculture has set aside funds, awarding $500,000 last month to a Virginia Tech research team to get better data on pollen drift.

The agency’s aim is to forecast the travel patterns of pollen grains.

Researchers will use drones to track pollen in hopes the results can be used to craft rules on how far hemp and marijuana should be kept apart.