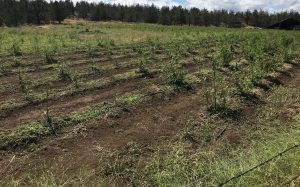 This hemp farm was on the edge of the Aug. 9 hailstorm in Central Oregon. All of these plants were 3-5 feet tall and healthy the day before this photo was taken. (Photo by Mayy Cyrus)

Hemp farmers in Central Oregon were faced with a situation no grower wants to see on Aug. 9, when severe thunderstorms in the area dumped golf ball-sized hail onto their fields.

Deschutes County Farm Bureau President Matt Cyrus, who also operates Triple C Farms, a hemp farm near Sisters, estimates that 400-500 acres between Cline Falls and Tumalo were either damaged or destroyed – amounting to an estimated $25 million in losses.

Most of the hemp acreage in Central Oregon is dedicated to CBD production and planted with feminized seed, which averages $1 per seed, Cyrus told Hemp Industry Daily.

“We still don’t know how resilient this plant is and what the overall impacts are going to be when it’s all said and done.”

While various remedies have been offered to help farmers try to salvage their crops damaged by the hail, there is still so little experience with industrial hemp crops that it’s hard to know what would work, Cyrus said.

Wesley Ray, co-founder of Combined Hemp, a farm in Bend, saw damage on his 35 acres of hemp fields but said he’s not ready to give up on the crops yet.

“Friday evening we were just about to leave the farm for the day and we saw the hailstorm rolling in, so we backed our pickup under the barn and waited for a couple of minutes to kind of see what happened,” Ray told Hemp Industry Daily.

“We sat there for 12 minutes and just watched almost every leaf on the majority of the plants be decimated to fully laying on the ground. And then it was just heartwrenching to walk out there.”

Ray produces hemp for CBD and CBG products, and the plants already had produced flower. But many were knocked off by the hail, which sat about 6 inches deep on top of the strips of black plastic he put down as a weed barrier before planting, he said.

Attempting what he is calling “Operation Comeback of the Year,” Ray and his family got busy the next day implementing an action plan, starting with flushing and refilling the irrigation pond.

Ray said representatives from the local irrigation district who helped with the pond were surprised he had asked for his full acreage of water after the storm, saying other farmers in the area were taking a 100% loss on their crops.

Having worked in cannabis for 12 years, including hemp cultivation for the past three, Ray said his experience taught him how resilient the plants can be.

While growing marijuana in an indoor environment, Ray said he learned a technique known as schwazzing or “strip and flip,” which involves removing fan leaves to allow more light to pass through to bud sites so plants can focus on developing flowers instead of keeping the leaves alive.

Conversely, in hemp cultivation, leaves are desirable because they contribute to the weight of biomass, Ray said, but that extra material can also decrease a plant’s CBD percentage.

“We would literally defoliate the plant … and end up with baseball bat-sized colas on our plants,” he said.

“So we could actually see higher CBD numbers this year on our biomass as opposed to years prior because of the fact that we’ve gotten rid of all the extra foliage.”

After applying soluble seaweed with a nitrogen-phosphorus-potassium blend at 8 gallons per acre, Ray said he’s already seeing new growth on the plants and is optimistic, but it will still be a few weeks before he knows the extent of the damage and whether the crops will pull through.

“We’re seeing buds actually starting to regrow and flower on plants that didn’t have flower before, so I think we’re going to recover,” he said.

Ray said he had crops in the ground four weeks before most of the farmers in the area, so the more mature plants may be salvageable compared to crops planted in July or August.

He has actively been posting photos on LinkedIn throughout the season to document his experiences on the farm. Sharing photos of the hailstorm damage, he said, has resulted in an invaluable show of support and advice from hemp farmers in Canada, Colorado and other areas who have experienced bad weather and offered to help.

“So many people are watching what is going on right now that my followers are saying, ‘We have to make sure you win on this one,’” Ray said.

Cyrus said while Oregon weather can vary, hailstorms aren’t typical for the season or the area. And while crop insurance for hail is available through some private companies, few farms likely have taken out policies because of the high cost of protection.

It’s possible some farmers who leveraged their land to plant hemp this year could end up filing bankruptcy if they can’t save the damaged crops, he said.

Pete Gendron, president of the Oregon SunGrowers Guild and a marijuana cultivator in Josephine County, said many of the hemp farmers in the area may have been new to agriculture and didn’t see the risk versus reward for something like hail to justify paying for crop insurance.

“Hemp is the highest value crop in Oregon, so payout will be higher per acre,” Gendron said.

“Even as recently as last year, hemp wasn’t looked at as a lucrative enough crop to offer crop insurance, but within the past year, acreage has increased by 300% – it just became a major crop.”

Still, private insurance companies have a cutoff for the size of farm that is eligible for insurance, according to Barrett Dash, who manages Dome Grown Produce and Hemp Farm, a small operation outside of Redmond that was on the perimeter of the hailstorm.

“We were asking around, but most of the insurance policies are covering bigger farms – they want 25 acres or more,” Dash told Hemp Industry Daily.

Federal and private crop insurance needs to be a priority to cover farms of all sizes, Dash said.

“It’s something that we would like to have, but we’re a really small farm with a really tight budget and we do this on our own, without much outside help.”

Meanwhile, Dash said, farms like his are at the mercy of Mother Nature.

“We just have to be thankful if we get lucky and something like that skirts us.”