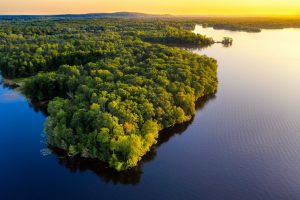 Wisconsin’s humidity and long winters make it a tough place to cultivate hemp, but the state’s recent history shows the plant can still grow in abundance.

Decades of cannabis prohibition, however, means farmers are having to relearn how to grow the crop and which cultivars are best suited for Wisconsin’s climate. This was the state’s third year of hemp cultivation under the 2014 Farm Bill pilot program. The first two years were hindered by wet weather, but 2020 was better, said Rob Richard, president of the Wisconsin Hemp Alliance.

“Overall people were just a little bit down in terms of how wet it was those two years,” he said. “I think 2020, in terms of a growing perspective, has been outstanding.”

Although licensed acreage in 2020 was lower than 2019, it doesn’t signify waning interest, even if finding buyers for hemp biomass has been challenging because of a glut of CBD in the market.

“A lot of people still want to grow the crop and figure out how to do it well, but they just don’t want to lose a lot of money,” said Shelby Ellison, an associate professor of horticulture at the University of Wisconsin-Madison.

“So they’re prepared to not be able to sell their crop, but they still really want to get better at growing it and therefore be ready if there’s an industry there in the future.”

It’s not difficult to envision. Back when the U.S. was producing World War II films such as “Hemp for Victory” to promote the plant’s production, Wisconsin farmers were featured prominently, according to Wisconsin Magazine of History. By then, Wisconsin was the country’s leader in hemp acreage and fiber production.

Now a new generation of growers need to master hemp cultivation. Ellison is part of a group of scientists and university extension agents working to establishing the best practices for growing the crop in a wet, often frigid state with a dearth of daylight in the winter. The information they gather via variety trials will be posted on the university’s hemp extension website.

“It started by just all of us realizing that no one had any expertise in hemp because we’re all coming from different crops and had no experience growing cannabis of any type before,” said Ellison, who developed and taught UW-Madison’s first industrial hemp course this spring.

Part of the challenge for Wisconsin currently is many of the hempseeds being used come from Colorado and other parts of the west, where the climate is drier. Wisconsin’s humidity makes plants particularly vulnerable to diseases.

“So you really need to figure out how to grow more disease-resistant varieties in the Midwest, where it’s going to be more humid and have more disease pressure” compared to drier regions, she said.

“The weather kinda killed us up there on that 1 acre, but we had a great turnout this year,” Glaz said. “All the stars aligned this year – perfect amount of rain.”

Like many other states, Wisconsin is operating under the federal regulations from the 2014 hemp pilot program – rules that are far less restrictive than what the U.S. Department of Agriculture is proposing to adopt. Richard, with the Wisconsin Hemp Alliance, said growers were pleased that the USDA granted states a one-year delay on implementation of the rules, which would have taken effect Nov. 1.

The federal agency is under pressure from states to change several aspects of what its is proposing, including a provision that requires growers to harvest their crop within 15 days of testing it for THC levels. Under hemp pilot rules in Wisconsin, growers have twice the amount of time to harvest.

“So at harvest in September, October, you know that the weather becomes a big factor and to put farmers under the pressure of having to harvest their entire crop within a two-week period is somewhat insane,” he said.