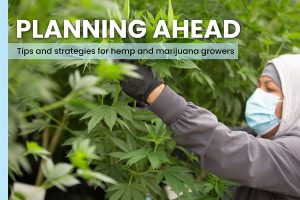 (This is the 13th installment in a series focused on cultivation planning and first appeared at MJBizDaily. The previous installment is available here.)

Move over, tractors – drones might play a large role in the future of sustainable cannabis cultivation.

Companies that make agricultural drones say they can offer marijuana and hemp cultivators economically and environmentally sustainable help with a range of applications, including:

Drones can save growers money while improving access to crops and providing services during off-peak hours.

This all helps producers maximize time and resources while minimizing soil compaction caused by conventional equipment.

According to Derrick Perkins, founder of The Drone Farmers in Denver, drones have “no diesel emission, no greenhouse-gas emissions, and they reduce soil compression.”

When The Drone Farmers started five years ago, the company specialized in aerial photography.

That expertise evolved to crop surveys that helped quantify plant and soil health for improved productivity and management.

The company has since added drone capabilities such as aerial pesticide application that’s targeted to areas where pests are detected. 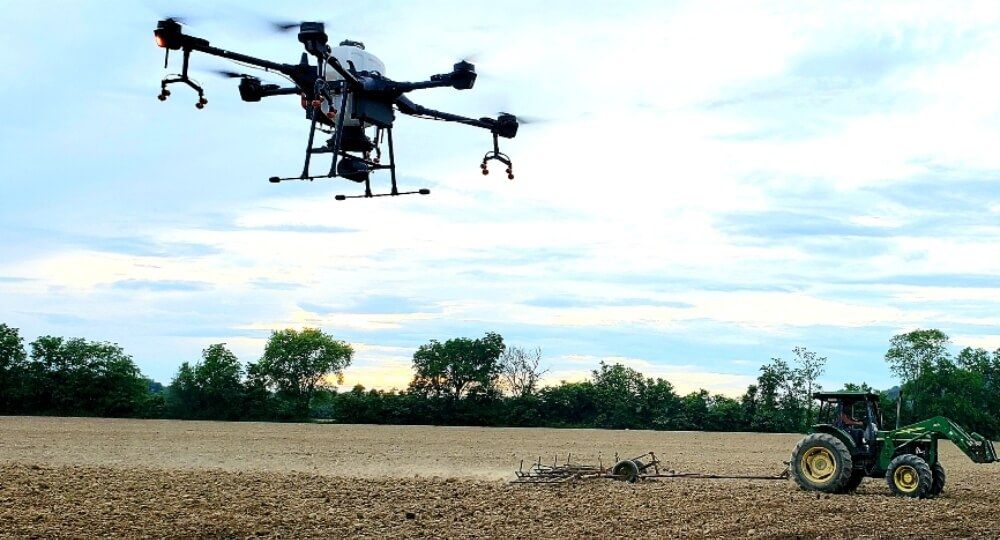 Drones not only can help cannabis farmers save time and money, but they’re also good for the environment. (Photo courtesy of The Drone Farmers)

“Every time a tractor is not used, a farmer can receive a carbon credit for adjusting their farming practices,” Perkins said.

Parabug, based in Salinas, California, makes drones that apply beneficial and predatory insects directly to crops on a small and precise scale.

Founder Chandler Bennett calls Parabug an Uber for bugs because the drones transport the insects directly to the plants.

Independent pest-control advisers can apply to operate drones for Parabug to apply controls, but they must be trained and certified through the Federal Aviation Administration.

Parabug has no exclusivity with biocontrols suppliers, leaving control methods up to the pest-control advisers.

Extreme weather like much of the West has been seeing this summer is another reason to consider drones as an alternative to manual labor.

“We had rain last night, so most of our fields have too much water to take a sprayer,” said Andrew Bish, chief operating officer of farming equipment manufacturer Bish Enterprises and founder of Hemp Harvest Works, which distributes drones for pesticide application out of Giltner, Nebraska.

“So, on a day like today, we can go in with a drone and cover 100 acres and get a lot done and not have to worry about wasting a day.”

Drones have the advantage of working during off-peak hours as well, Perkins said.

Most pests come out at night, so the product is even more effective, and the drones avoid spraying the “good insects,” such as ladybugs and bees, which are typically active in daytime.

“So, spraying at night,” Perkins said, “we’re not spraying the good insects. We’re not worrying about burning the plant.

“And when the farmer wakes up in the morning, the crop is sprayed.”

Drones are often more cost-efficient than using conventional equipment or contracting an airplane or helicopter for crop-dusting, Bish said.

“You’re not typically seeing (hemp) fields that are hundreds and hundreds of acres, so it doesn’t make sense to bring in a massive sprayer – or even use backpack sprayers and walk a bunch of people through the field when you could program a drone to go through and do that work for you,” he said.

“Then all you have to do is fill it and change batteries.”

Large-scale sprayers can cost $500,000 to $750,000, compared with $25,000 for a drone, making the technology more accessible to smaller and midsize growers who can realize a faster return on investment with drones than they could with larger machinery, Bish said.

But cultivators can’t just buy a drone off the shelf and start using it without training. Drone pilots must also be licensed operators through the FAA, which means additional operation and maintenance costs.

Another option is contracting with a full-service drone company such as The Drone Farmers, which offers package prices that are typically less than hiring an airplane crop duster and comparable to farm services providing application with conventional equipment.

That depends on whether cultivators are using inputs they’ve already purchased or buying pesticides and other products provided by the applicator.

Bish said it’s a decision that cannabis operators have to “pencil out.”

“It really just depends,” he said, “on the value of your crop, the number of acres you’re growing and how long you intend to use the machine.”