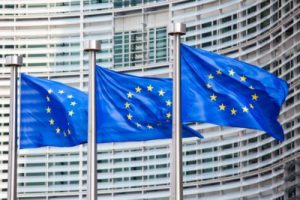 European flags wave in front of the Berlaymont, which houses the headquarters of the European Commission in Brussels.

The European Parliament has voted to raise the THC limit for industrial hemp from 0.2% to 0.3% and allow hemp and hemp-derived products to be subject to European Union marketing standards.

The European Parliament doesn’t have final say on the farm policy overhaul, but hemp activists in Europe applauded the votes to bring Europe’s hemp THC limit in line with those used in the Americas.

“The increase of (the) THC level would allow new varieties to enter the market and to be bred, resulting in a better adaptation of the crops to the climatic conditions of the different EU territories,” the European Industrial Hemp Association said in a statement on Monday.

The votes were taken to establish the European Parliament’s stance on the proposed Common Agricultural Policy reform, which will determine how the European Union’s farm subsidies will be carried out after 2020. Amendments affecting the hemp industry included:

Trilateral talks with negotiators from the Parliament, Council and Commission on future EU farm policy are likely to begin in mid-November, though the timing has yet to be confirmed, European Parliament press officer Jan Jakubov told Hemp Industry Daily.