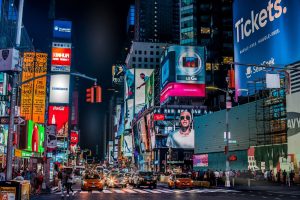 Under the historic 2018 Farm Bill, hemp companies should be able to advertise like other agricultural producers and manufacturers.

But many businesses say they still face hurdles, especially with digital marketing.

“The Farm Bill is opening the doors to have the conversation with these people,” said Ari Sherman, president and co-founder of Evo Hemp. “It gives us a lot more room to stand on when we try legitimize ourselves and we try to convince people.”

Residents in the San Francisco Bay Area could soon see or hear ads telling them where they can buy Evo Hemp products, partly thanks to the Farm Bill.

The new law is making organizations more comfortable with featuring marketing materials from the hemp industry.

Sherman says he still must convince some places to run hemp ads.

And Evo Hemp and a wide variety of others in the industry are still struggling to advertise on “the big three” – Facebook, Google and Instagram.

“It’s always a constant game of trying to convince people that these are legal products; we sell these products all over the country, and the federal government just told us that they’re OK,” Sherman said.

New opportunities to experiment with advertising

Evo Hemp plans to spend about $1 million on advertising and marketing in 2019.

The company’s products already are sold in more than 4,000 retail outlets, but Evo Hemp is looking for more exposure for its 17 SKUs – including hemp protein bars, seeds and oils.

“We’re trying out more traditional marketing that is a little more locally focused so we can really target the stores where are products are in,” Sherman said.

Evo Hemp purchased bus and newspaper ads in the Bay Area. The company also plans to run sponsorships with an NPR affiliate in the Bay Area in February.

The company previously spent thousands of dollars trying to get people to sample its products in stores – a strategy Sherman called expensive and inefficient.

But conventional display advertising may be opening faster than digital platforms for hemp companies.

“We’ve advertised in a variety of local papers, but the ROI on the more traditional advertising is not as great as it is with more social media … where you can have a more targeted ad approach,” said Hannah Smith, director of communications for Joy Organics.

Since the Fort Collins, Colorado-based seller of hemp CBD softgels, tinctures and topicals can’t advertise through the major social media platforms, the brand has turned to influencers to promote its products.

But advertising through social media platforms is tricky.

Facebook, which also owns Instagram, said the company allows some, but not all, hemp and CBD products to be advertised on its platforms.

Asked whether the Farm Bill’s legalization of CBD would change Facebook’s policy, she said it would not but declined to elaborate.

Google did not respond to questions about its policies for hemp and CBD advertising.

In addition to working with influencers, Zen Pup hosts a blog. The company also promotes products through email newsletters.

“The Farm Bill passing is definitely going to open up some new opportunities within the industry, and we’re excited to see what happens as time progresses over the next couple months,” Weatherhead said.

But CBD entrepreneurs aren’t waiting for others to make that move, instead finding creative ways around ongoing obstacles to advertising and marketing their products.

On Feb. 3, Baristas Coffee Co. of Kenmore, Washington, will advertise its new EnrichaRoast CBD coffee on the cell phones of Super Bowl attendees. The coffee company is also placing digital displays in the stadium.

Though short of the elusive – and pricey – television advertising during the Super Bowl, advertising at the game itself “will give us tremendous exposure,” Baristas CEO Barry Henthorn said in a statement.

Companies should follow the policies set by Facebook and Google to avoid having their accounts shut down, said Cary Smith, senior vice president of social media at North 6th Agency, which works with cannabis companies in Colorado and New York to develop social media and content strategies.

He believes hemp and CBD companies will focus on marketing themselves as lifestyle brands, stealing from the playbooks of tobacco, alcohol and energy drinks.

“It won’t be, ‘Consume this cannabis product to feel this way,’” he said.

“It will be more like, ‘Here’s your active lifestyle. Here’s what you do. And here’s how cannabis can be a part of it.’”