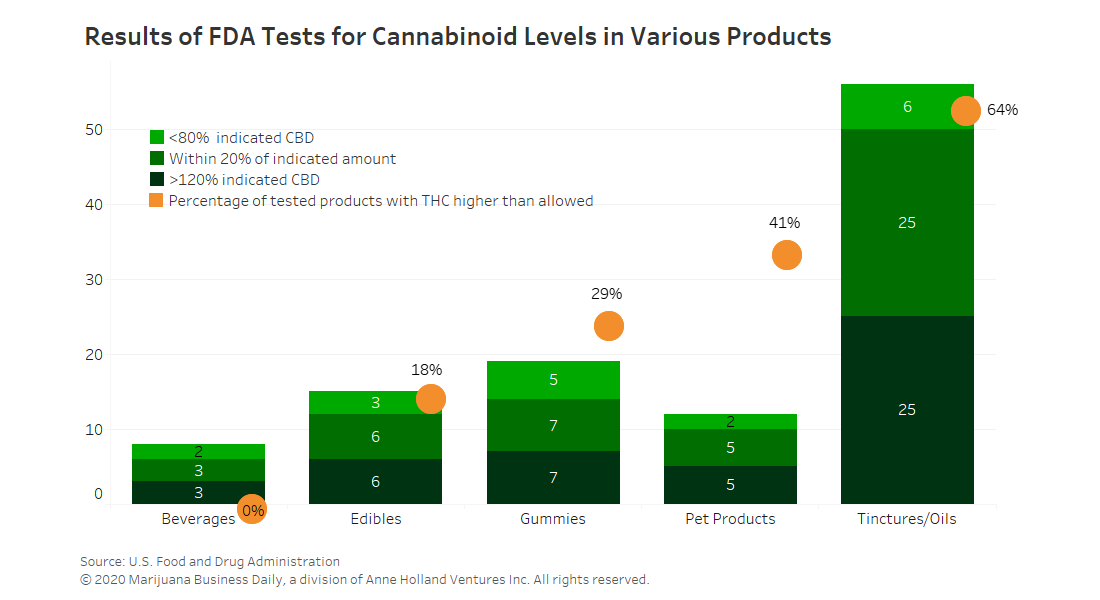 Testing of CBD-infused products conducted by the U.S. Food and Drug Administration found that many are mislabeled, containing far less or more CBD than advertised and in some instances THC that wasn’t supposed to be there.

The results were included in an undated letter to Congress that Hemp Industry Daily obtained Wednesday. An FDA spokesman confirmed the letter but declined to comment on the findings.

In all, the FDA tested 147 products. Not all were labeled as having CBD, but 138 contained at least some amount of the cannabinoid. Of the 147 products, 72 contained some THC, although the concentrations were low.

The products were chosen at random after the FDA searched the internet for products. The agency also chose products from:

The federal agency repeatedly noted that the testing was from a limited sample size and that no definitive conclusions could be drawn, but “supports the need for” long-term study.

The FDA said in its letter that it “recognizes the significant public interest in CBD products.”

“However, there are many questions about the characteristics of currently marketed CBD products.”

Hemp producers and advocates called the FDA review alarming but also validating, because many have called for increased federal oversight of the industry.

“Hemp is an industry that holds itself to the highest standards, and as a whole we would like to rid the marketplace of the bad players who improperly label products and put consumers at risk,” said Marielle Weintraub, head of the U.S. Hemp Authority, a self-regulatory agency.

“Today’s report emphasizes what we have been arguing for years: FDA needs to regulate hemp and CBD products.”

An executive from Canopy Growth Corp., one of the world’s largest cannabis suppliers, applauded the FDA’s “efforts to recommend future studies that will improve insight into our fast-growing marketplace.”

“We look forward to FDA’s continued work to better understand the benefits of our industry, and to ensure bad actors are removed and clarity is provided across the marketplace,” said David Culver, U.S. vice president of government and stakeholder relations at Canopy.

The FDA’s report comes the same week that House budget writers called for the FDA to do more to regulate the CBD marketplace.

A subcommittee of the House Appropriations Committee set aside $5 million for the FDA to continue its review of over-the-counter CBD in the 2020-21 budget year.

In an explanatory note, the budget writers said they are concerned that CBD products “continue to pose
potential health and safety risks to consumers through unsubstantiated and misleading claims such as treating a wide-range of lifethreatening diseases and conditions.”

Lawmakers concluded that the FDA should “continue to prioritize consumer-safety through application
of the law.”

The $5 million budget for additionsal CBD review by the FDA is not final until the full Congress approves it.

The FDA also studied hemp ingredients in cosmetic products in 2019, with the help of the University of Mississippi, according the letter.

Out of 109 hemp or CBD-containing cosmetics tested in that review, 41 products claimed to contain CBD. The remaining 68 claimed to have hemp but did not specifically say CBD.

All 41 products labeled as containing CBD did have the extract. But 12 of those also contained THC, even though that wasn’t specified. Two products contained 120% of the CBD indicated.

Also in 2019, the FDA conducted a smaller study of CBD products, choosing for testing products that were marketed as having medical value, among other things. The agency tested 31 products, with 21 labeled as having CBD. Of those 21, seven had CBD within 20% of the amount advertised. Of the 31 products, 15 contained THC.

The FDA also tested the products for heavy metals including:

The agency and found that none of the tested products contained levels that raised “significant public health concerns.”

The U.S. Hemp Authority pointed to the contaminant results as a bright spot.

“FDA has revealed what the majority of industry already knows: While more work needs to be done to ensure CBD products meet label claims, the majority of products do not contain contaminant levels considered to be unsafe,” Weintraub told Hemp Industry Daily.

The FDA said it plans to begin a longer-term study this year, and that product sampling and testing will be conducted by a third party.