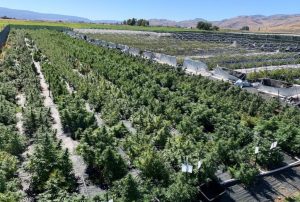 (This is the fourth installment in a series examining sustainability in cannabis cultivation. Read Part 3 here.)

Skyrocketing fertilizer prices have hemp and marijuana growers in a cold sweat about how they’re going to provide their plants with the proper nutrition this year.

Fertilizer typically makes up 15% of all farming costs in the United States., according to the American Farm Bureau Federation. But prices for macronutrients like nitrogen have doubled and even tripled in the past two years, threatening to drive smaller farms out of business.

Hemp producer Rick Brown in Henderson, North Carolina, said his fertilizer prices have tripled since last year, from approximately $10,000 to $31,000 this year.

Even some of the more sustainable options such as compost teas and animal manure are in short supply because of the number of farmers clamoring for nitrogen.

“We were looking at incorporating a liquid program of calcium with compost teas that are being regulated to come up with a closer rate of 190 pounds of nitrogen per acre,” Brown said.

“That’s the only way that we could transition to get through the season. However, we’re in direct competition with other farmers to get the same products.”

Chicken manure is also hot in demand, a situation worsened by an avian flu outbreak at nearby poultry farms, Brown said.

Brown, who produces more than 200 acres of hemp fiber varieties under contracts with local corporations, said he can’t cut back on fertilizer rates.

But thanks to those growing contracts, he is shielded from some of the risk as well.

“There’s a reserve on the front end of the contract that the farmer can pull from, to use for maintenance issues, inflation costs such as fertilizer – what we’re dealing with right now – diesel, things like that,” Brown told Hemp Industry Daily.

“So it gave us an opportunity to be able to pull funds today to cover the costs of things that we don’t have control over.”

Because his farm also produces organic vegetables and other crops, Brown said he is stepping up his composting efforts.

Still, it may not be ready for his crops this year, Brown said, so he’s looking into negotiating prices and landing grants to help raise the money to pay for the inputs he needs this season.

Outdoor and indoor cannabis producers may have a tough time finding other macronutrients as well, said Travis Higginbotham, vice president of production for marijuana producer Harborside in Salinas, California.

Higginbotham said with the existing challenges in the fertilizer supply chain, he’s had trouble sourcing:

Growers should be wary of new sources if their usual suppliers can’t find what they need, because they could be bad actors trying to turn a profit by disguising needed nutrients for something else that could hurt their crops, Higginbotham advised.

He pointed to companies selling mislabeled monopotassium phosphate, which could hurt yields if applied by a duped cultivator.

“Also, if (micronutrients) become challenging, cannabis growers will need to watch out for heavy metals with new sources,” Higginbotham said.

One fertilizer option that could both save money and minimize polluting runoff: simply using less.

According to Bruce Bugbee, a professor of environmental plant physiology at Utah State University, “cannabis growers are famous for overfertilizing with phosphorus,” often applying more phosphorus than plants can efficiently use, which causes polluting runoff.

Bugbee pointed to research showing that phosphorus is only beneficial on cannabis from an applied rate of 15 parts per million to 30 ppm.

“We have not seen a value of these incredibly high phosphorus levels, and really, we’re waiting for growers to announce that they grow sustainable cannabis, (which is) not overfertilized with phosphorus,” Bugbee said during a webinar produced last week by Cornell University in cooperation with the U.S. Department of Agriculture.

Bugbee conceded that some cannabis cultivars appear to benefit from elevated phosphorus levels. It’s an area in need of more research, but cannabis growers should understand the way cannabis metabolizes the fertilizer.

Cannabis flowers often will cannibalize phosphorous from the leaves to help with seed production – even though most commercial cannabis plants are feminized and don’t produce seeds, Bugbee explained.

Meanwhile, he said, the flowers “accumulate massive amounts of phosphorus,” which can leach into the soil, causing unnecessary waste and pollution.

Adding natural amendments such as biochar to the soil can reduce fertilizer requirements by up to 50%, according to James Gaspard, CEO of Biochar Now in Loveland, Colorado.

Biochar is fixed carbon, which binds nutrients to the rootzone and releases them to the plants. It can hold up to six times its weight in water, and the nutrients don’t wash out of the rootzone, Gaspard said.

”(The microbes) start living life cycles, and they’ll actually start producing … nutrients for the plant as well, so it becomes a living soil,” Gaspard said.

While there’s also less biochar available than is needed, especially in Eastern states, producers are ramping up. Meanwhile, growers can easily make their own, said Kathleen Draper, owner of Finger Lakes Biochar in Canandaigua, New York.

“It is the easiest thing in the world to turn hemp into biochar with a very low-technology kiln,” Draper said.

Raw biochar shouldn’t be mixed directly into the ground – it needs to be mixed with other nutrients such as humic and fulvic acids, or even manure or compost so it doesn’t pull nutrients out of the ground.

Typically, growers wouldn’t want to use high-value crops like cannabis to make biochar, but considering skyrocketing costs, Draper said it may be worth it.

“When you tell me that amount of money for fertilizer, if I were a hemp farmer … I would make it into biochar (and) figure out a cheap way to put some nutrients in it, and then use that as your fertilizer,” she said.