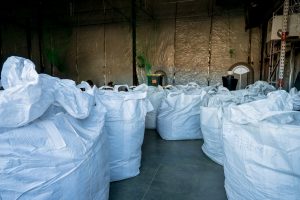 Food: Hemp grain storage is often kept on-farm. Canada requires hemp grain to be stored in clean, dry, aerated and locked bins. These can be similar to the steel bins used for corn, wheat and other crops. But unlike those grains, which are often heavily processed, hemp is served as a raw food, according to Russ Crawford, president of the Canadian Hemp Trade Alliance.

Fiber: Similar to large, round bales used for storing hay as feed for animals, hemp bales can weigh up to 1,000 pounds and offer compact storage.

“It has to be baled dry, at a low moisture content like 12%, so it does not mold in storage,” he said.