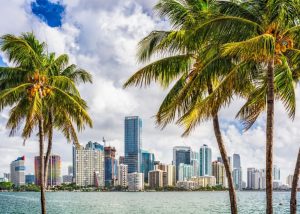 Editor’s note: Get up-to-date insights on growing conditions in all states at the Hemp Industry Daily Forum at MJBizCon. See the packed agenda of hemp discussions and insights here.

Florida’s inaugural year of hemp cultivation has been a challenging one, with the state’s tropical climate proving that seed varieties that work elsewhere just don’t function the same way in the Sunshine State.

Growers contended with short daylight cycles, humid weather, and sometimes a lack of familiarity with some aspects of hemp cultivation, to wit: In northern states, you can get away with hanging plants to dry in a barn, but if you do that in Florida the plants will mold, noted Jeff Greene, co-founder of the Florida Hemp Council.

“Everybody thought, ‘It’s real easy to go out and grow a plant and sell it and make all the money that the industry says you can make,’ and I think reality kind of set in.”

Greene and others still believe a hemp industry can thrive in Florida, but it will take a couple of years to breed cultivars ideal for state’s climate and learning from this year’s mistakes.

“Florida farmers are some of the most resilient people on the planet, and they will figure it out,” he said.

About 14% of the hemp acreage Florida cultivated this year had to be destroyed because of various factors, including genetic performance and testing above the 0.3% THC federal limit, said Tara Tedrow, a University of Florida law professor who works in private practice for the cannabis industry and serves on the state’s hemp advisory committee.

According to the committee, Florida issued 611 cultivation licenses this year and licensed 2,100 for planting, she said. Florida’s total hemp acreage put it ninth among states this year, based on preseason licensing numbers.

The University of Florida’s hemp pilot program had three-quarters of its crop test above the 0.3% THC limit.

Having crops go hot is part of the learning process, said Scott Burgett, co-owner of Green Earth Cannaceuticals in Gainesville and participant in the pilot program at Florida A&M University.

“I don’t think that’s a negative that they have that amount of hot crops. I think that’s a very good representation of what the average farmer (is) going to have to deal with,” Burgett said.

Burgett said the high-THC crops underscore the importance of having a good testing program.

“Most of these genetics, if allowed to stay in a field past a certain period will reach a threshold above 0.3% and have to be destroyed,” he said. For example, one of Burgett’s crops that tested at 0.3% THC was at 0.6% THC 15 days later – the window of time by which state rules say you have to harvest the plant after the first test.

“Not having a good testing program, it’s very easy for the farmer to overshoot that,” he said.

Given Florida’s tropical climate, fungal diseases are among the biggest challenges for cultivation, Burgett said.

In Florida, hemp is planted during rainy season, which sometimes leads to root rot, he said. This year, farmers also saw hemp plants flower as early as May, when they’re supposed to be in their vegetative period.

There’s also the problem of moisture building in plants during rainy periods, leading to botrytis, or gray mold.

But Florida growers are limited in what cultivars they can try. Tedrow noted that, unlike some states, Florida can use only cultivars approved by a certifying agency or a university conducting a pilot program.

“I think one of the things you’re going to see in Florida that you see nationally is there will be problems with cultivation by virtue of the genetics that are being utilized,” she said. “So while the definition of ‘certified seed’ is certainly restrictive in the state of Florida, the intention was to try to prevent some of the problems that we’ve seen in other states.”

Florida is operating under the authority of the 2014 Farm Bill hemp pilot program, although the U.S. Department of Agriculture has approved the state’s cultivation plan that aligns with updated federal rules. Those rules were originally set to take effect Nov. 1, but the deadline to comply was extended for another year.