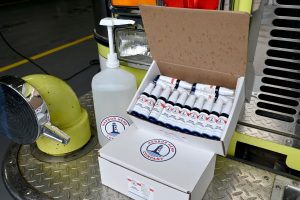 Private and public companies nationwide have rallied to donate money and supplies in the fight against the coronavirus pandemic – hemp and CBD companies among them.

At such an unprecedented time in world history, hemp and CBD companies are pitching in and doing their part by:

In late March, the U.S. Food and Drug Administration said it wouldn’t take action against manufacturers that are not already regulated by the agency if they made hand sanitizers following certain protocols, recognizing that that there had been a significant supply disruption for the alcohol-based products.

In response, several hemp processors converted their CBD operations to produce ethanol-based hand sanitizer to keep their staff employed during the economic downturn caused by the coronavirus outbreak. Some took that dedication one step further by donating products and proceeds to medical professionals.

It’s not an easy conversion, as there is a cost to these manufacturers to recalibrate their machinery, explained Jonathan Miller, a Kentucky-based attorney who leads the hemp advocacy group U.S. Hemp Roundtable.

“We have a lot of companies that are very patriotic and want to do what they can to support the effort,” Miller told Hemp Industry Daily.

“Their current infrastructure will allow them to transition into that kind of (production), so they’ve been willing to shut down a line of their CBD products to help with this particular desperate need.”

Among the converted manufacturers is Global Cannabinoids, a Las Vegas CBD manufacturer and B2B supplier. The company has started making bulk hand sanitizer for big-box stores and medical systems throughout the U.S and donating a portion of the products to first responders and medical staff in Las Vegas, according to CEO Ryan Lewis.

Thar Process, a Harmar, Pennsylvania-based company that makes hemp- and algae-based medicines, nutritional ingredients and supplements, developed a hemp-based hand sanitizer called Hemp Pura that it’s been donating to local homeless shelters, health networks, police departments, municipalities and other essential workers. The product was initially made for the homeless to provide a first line of defense against COVID-19.

Hollister Biosciences, a hemp and marijuana producer based in Hollister, California, has made and donated several thousand bottles of hand sanitizer in the first shelter-in-place state. The Hollister Food Bank received the first batch, while multiple additional batches will be delivered to community organizations in the area over the next few weeks, the company said in a statement.

In the midst of a severe shortage for personal protection equipment and medical supplies like gloves and masks, some companies are leveraging their connections to find solutions.

KushCo Holdings, a packaging company that makes products for both marijuana and hemp products, is donating its full inventory of 100,000 pharmaceutical-grade, nitrile black powderless “bud gloves” to four different hospitals. The first donation of 25,000 gloves went to St. Joseph’s Hospital in Orange County, California, with the remainder going to others that need them soon.

“We’re trying to help to the extent we can,” Kovocevich told Hemp Industry Daily.

The company is juggling its charitable efforts with the need to focus on profitability, he said. The company laid off  some 49 employees – half its workforce – just last month, citing pandemic uncertainty.

In Canada, hemp and marijuana producer The Valens Co., based in Kelowna, British Columbia, has donated “significant quantities” of various personal protective equipment including gloves, gowns and sanitizing wipes to healthcare workers from the company’s existing supply.

A second shipment of supplies, including masks, will also be donated to frontline medical workers, and the Valens Company has plans to produce and donate 40,000 bottles of hand sanitizer to frontline healthcare workers across Canada, according to a company statement.

To help consumers considering CBD’s possible therapeutic benefits, some hemp and CBD companies have been handing out CBD samples directly to the public, as well as frontline medical staff.

Denver-based CBD wellness company Privy Peach says it is donating $10,000 worth of CBD tincture to medical staff interested in trying CBD during the COVID-19 crisis.

“Seeing the anguish and exhaustion of medical workers flooding the news daily, I wanted to help in the only way I could,” founder Kim Koehler said in a company statement.

The economic crisis has caused mass layoffs and frozen regular corporate donations to non-profit organizations, displacing residents who rely on them for food.

Donations from hemp and CBD companies have helped out with feeding elderly residents and people who are now finding themselves without a regular paycheck.

Austin, Texas-based online retailer CBDTakeOut is donating profits for all full-priced purchases to Furlough Kitchen, a food kitchen for laid-off employees with locations in Dallas and more locations being opened in Louisiana, Alabama and North Carolina.

Sojen Inc., a New York City-based CBD company, is selling a “Positivity Pack” care package of “quarantine essentials” – including its CBD tincture, a weighted blanket and a houseplant – and donating all the profits to CityMeals on Wheels, an organization that delivers prepared meals to the elderly.

In March, the U.S. Hemp Roundtable launched a regular series of “Work From Home – Work For Hemp Wednesdays,” an initiative to get the industry thinking about the future of hemp and how it can be a major part of the new framework for the U.S. following the coronavirus crisis.

Miller said while hemp industry members are working from home, he wants them to contribute ideas regarding how the hemp industry can be help now, but also work on developing new solutions during weekly Facebook Live sessions.

On Wednesday, Miller revealed that the U.S. Hemp Roundtable will be supporting Vitamin Angels, an organization that provides nutritional and dietary supplements to mothers and children in impoverished areas around the world, and asked members to consider donating if possible.

“There was a real desire in our industry to try to do something to give back and to help the country in this current national emergency,” Miller told Hemp Industry Daily.

“Unfortunately, we’ve gone through a few decades of prohibition, so hemp isn’t as viable these days for things like masks, bedding, curtains and hospital gowns – we really are unable at this time to produce these items in mass quantities.

“So we’ve been looking at other ways that the hemp industry can play a part in helping remediate the crisis we’re in but also to help lay the groundwork for the economic recovery that will be in front of us.”