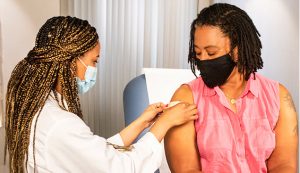 There’s a big party on the horizon at Glass House Farms, a marijuana producer in Santa Barbara County, California.

They’re calling it a fiesta, an outdoor celebration honoring employees after a year of COVID-19 trauma and disruption.

There’s just one catch: The party starts only after 90% of Glass House workers choose to get COVID-19 vaccines.

“I promised everyone that we’d have a summer party … when we hit 90% vaccinated,” explained Graham Farrar, Glass House Group’s president.

“We are there, just waiting for the two weeks from the second shot to pass and then … fiesta!” he told Hemp Industry Daily via email.

“After 18 months that feel like 18 years since our last party, people are pretty excited.”

Cannabis employers across the nation are looking for ways to encourage workers to get vaccinated, joining counterparts in other industries that are dangling cash bonuses, paid time off and other perks in hopes of getting their workforces back to normal.

Employers have the legal right to require vaccinations to remain employed, with exclusions for the medically compromised and religious objectors.

But cannabis employers are a lot like their counterparts in other sectors – conflicted about requiring vaccines or simply encouraging them.

An April survey of employers in the United States and Britain by Arizona State University and the Rockefeller Foundation found that:

“Employers are becoming more relevant and vocal on how they prepare their workforce, customers, suppliers and their community to return to the workplace,” researchers concluded.

Get the jab, or get a new job

Many cannabis employers are in the largest category, requiring employees to be vaccinated.

For Lloyd Traven, co-owner of Peace Tree Farm in Kintnersville, Pennsylvania, COVID-19 vaccines for workers producing his organic hemp clones are much like sanitation protocols in place for his vegetable producers.

He has given his workers until Labor Day to show they’ve completed their COVID-19 vaccines. He sees it as unfair to vaccinated workers to work alongside folks who haven’t gotten the shots.

“I just say, ‘It’s entirely up to you. I understand.’ I will also say that your employment here will terminate because of a refusal to abide by the rules.”

Traven points out that cannabis cultivators are making medicine.

“This is a health product, a medicinal product, a consumer product. It’s not for decoration; this is used to put in or on your body,” Traven said.

“We consider that to be a responsibility, to ourselves, to our customers and, most importantly, to our employees.”

At Spherex, a marijuana-cartridge manufacturer in Aurora, Colorado, Chief Operating Officer Dan Gardenswartz evaluated strategies to get his workforce vaccinated. He landed on cash payments for workers who opted for vaccines – and reached his goal of 100% compliance.

“A mandate is going to rub people the wrong way. No two ways about it,” he said. “We can get there the other way, which is incentivize people.

“Your pocketbook is a very powerful tool for employees. By giving somebody a little bit of extra money in their pocket at the end of the day, I think they were more than willing to go get the shot. No questions asked.

Some cannabis business owners are hoping that encouragement in the forms of education and paid time off will do the trick.

“Then, additionally, we’re providing paid time off for both of their shots,” Cresco Chief Communications Officer Jason Erkes said.

“We also have a program that will cover any potential side effects (from the vaccines) and time off they need for that.”

“It’s a priority for everyone to get vaccinated, and the time off is really helping (employees) have the time to do it without having to take time away from their families,” Erkes added.