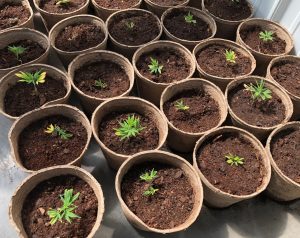 Hemp entrepreneurs are still waiting to realize the benefits of being able to import hempseed as a commodity, even as they cheer recent assurance from the federal government that change is on the way.

The U.S. Department of Agriculture (USDA) released new guidance this month on how hemp importing will work now that federal drug authorities are no longer in charge.

The change was the first of many the hemp industry can expect to see as the U.S. Department of Agriculture (USDA) continues making rules for hemp production, distribution and marketing.

“This is a good step in the right direction,” said Tom Dermody, vice president of Bija Hemp, a Denver-based industrial seed supply company that works on certified seed programs.

“But just like the other items related to the 2018 Farm Bill, we’re still missing substantive criteria that would actually make (the seed import guidelines) a regulatory process.”

The USDA is working to adopt regulation of hempseed from the U.S. Drug Enforcement Administration (DEA) with input from Customs and Border Control.

While phytosanitary requirements will be put in place, hemp will be subject to the requirements of the Federal Seed Act, which regulates the interstate shipment of agricultural seeds.

Seed manufacturers and breeders will have to abide by that criteria, according to Dermody.

Hempseed imports have been accompanied by DEA permits since the 2014 Farm Bill, the law that permitted hemp pilot research programs but left the plant a controlled substance.

Passage of the 2018 Farm Bill removed hemp from the Controlled Substances Act and transferred regulatory authority from the DEA to USDA.

The guidance issued in mid-April was too close to the 2019 planting season for many hemp farmers, but Graff pointed out that the six-week government shutdown complicated the USDA’s job regulating a plant that, until recently, had been a controlled substance – something that had not happened before.

“That’s where I think there has to be a balance struck between industry expectation and reality,” he said.

“We have this landmark legislation, which is exciting, but with any new and moving dynamic regulatory environment, it takes time for the agencies to figure this out, and oftentimes they want to defer to one another.”

While most of the industrial hempseed used in the United States over the past four years has been imported from international markets, the country is quickly becoming a leader in developing femininized seed to supply the CBD market, said John Roulac, founder and chief hemp officer of Boulder, Colorado-based RE Botanicals, a producer of organic hemp extracts.

“In general, Canada hasn’t been a leader in high-CBD feminized varieties. Their varieties are more for hemp protein, and that market isn’t growing as fast,” Roulac told Hemp Industry Daily.

Since the Farm Bill passed in December, there has been a significant ramp-up of U.S. businesses cultivating the supply for CBD extraction, according to Geoff Whaling, chairman of the National Hemp Association.

Much of the current supply is from seed producers in Colorado, Oregon and Washington, Oregon and Colorado, Whaling said, but more businesses across the country are developing their own supply and breeding new genetics for high-CBD production.

This compares with $3.85 per pound of certified industrial hempseed from Canada or Europe.

The aggressive CBD hempseed market may be focusing on American producers now, but once U.S. regulators establish more concrete import and export rules for hemp and its derivatives, it will open up trade for those producing plant genetics for CBD, Roulac said.

This will affect postharvest material such as raw flower, processed cannabinoids and finished hemp products as well, Graff said.

“Prior to the 2018 Farm Bill, there were no specific tariff codes for raw hemp flower or processed cannabinoids … or definitive pathways on how to handle those imports and exports,” he said.

But it’s not going to be an easy process because hemp and its derived products are easily confused with marijuana.

“The practical reality of distinguishing hemp flower from marijuana flower, or hemp-derived cannabinoids from marijuana-derived ones, still remains,” Graff said.

“We need guidance and likely tariff codes to better ensure these shipments are not subject to seizure going forward.”