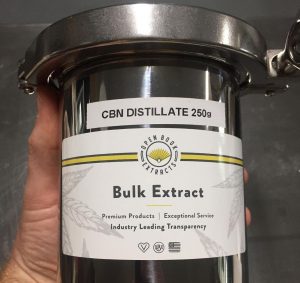 Breeding for rare components can save money compared to finding a ‘needle in the haystack,’ experts say

As minor cannabinoids gain popularity and acceptance among cannabis consumers, extraction companies looking to cash in on the trend can approach creating them in several ways.

The easiest and most common way is to find plants that have been bred to be rich in lesser-known cannabinoids such as CBG.

There are multiple ways to extract for minor cannabinoids, depending on the extractor and the targeted compounds.

If the genetics already have been developed, then an extraction company can use traditional methods such as butane, CO2 or ethanol solvents to strip out the targeted compound.

The cannabinoids are then isolated into a crude mixture and can be further purified and separated by distillation or chromatography.

For cannabinoids that don’t show up in strong percentages in plant source material, companies rely on chemistry to create larger quantities.

Rarer cannabinoids such as CBC and delta 8-THC, for example, can be created using biosynthetic processes, through which a different organic material such as yeast is converted into the desired compound.

The trick to extracting minor cannabinoids is trying to separate a specific molecule from a biological source, whether it’s yeast or bacteria or a hemp plant.

“When you talk about extraction, it’s all chemistry,” said Jonathan Vaught, CEO and founder of Front Range Biosciences, a cannabis genetics producer in Lafayette, Colorado.

The cost of extraction

There are many chemical processes and tools to extract THC and CBD, and they work the same with the other cannabinoids, Vaught said.

He added that depending on the purity an extractor is looking for, the costs of the extraction process can vary. A broad-spectrum extract with multiple compounds will really drive up the cost.

For example, if a plant produces only 1% THC-V and produces 15%-20% THC or other cannabinoids, it’s going to be much more expensive and challenging to purify that THC-V and isolate it, according to Vaught.

Currently, THC-V extract is about 3-5 times more expensive than THC, Vaught said, primarily because of limited supply and low yields from the varieties that exist in the marketplace.

Vaught sees breeding for minor cannabinoids and plant development as a solution to cut costs on extraction.

His team is working with cultivators to improve the efficiency of growing for these minor cannabinoids. Once the growers start to produce more, “the economics start to change,” Vaught said.

Increases in supply and demand

A lot of companies are using minor cannabinoids to boost a product, he said. For example, a company might take a CBD extract and add more CBN to create a different effect for the consumer.

“What we’re beginning to see is, in the cannabis industry, people are leveraging supply and demand,” he said.

“This year, there’s more and more people producing these cannabinoids.”