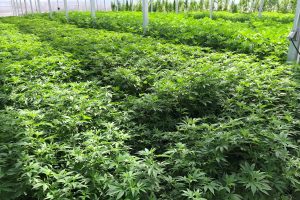 Cannabis cultivators are using technology to reduce water and energy use, cut down on labor costs and increase yields and quality.

Here are examples of the technology that marijuana and hemp growers are using to make their facilities more productive:

Gone are the days when a cannabis grower would lift a pot to check how much or little water a plant needed.

Several companies are offering sensors that allow a cultivation operation manager to evaluate soil moisture via software that can be viewed on a computer or smartphone.

At The Source in Las Vegas, Bill Campbell, director of cultivation, said his company recently added grow-media water sensors that gather data he uses to make decisions regarding how much to irrigate his plants.

The sensors – which Campbell estimates cost $50-$100 each – can notify him when they detect a certain percentage of the plants lack adequate water in the substrate.

“We’ve dropped our water usage by almost 60% since we started the sensors,” he said.

Campbell estimates he’s saving about 300 gallons a day, but that benefit goes beyond the cost savings.

“For me, it’s an environmental benefit,” he added.

Before switching to the sensors, growers would check the grow media manually, making educated guesses about the moisture content.

Keeping the plant precisely watered has also increased yields as well as terpene and cannabinoid production, according to Campbell.

In broader terms, Kenneth VandeVrede, CEO of HillviewMed, a vertically integrated marijuana and hemp company based in Pequannock, New Jersey, is using a system that incorporates sensors that gather plant data from top to bottom.

Growers can use the data to make a variety of decisions, such as how much light the plant should be getting. Use of the data is a key part of HillviewMed’s business strategy.

“Everything’s data-driven now,” VandeVrede said. “We build our facilities and assets so our growers can use data as tools to grow.”

For Derek Rayhorn, director of cultivation for Chalice Farms, based in Hillsboro, Oregon, having that data logged into an automated system helps him compare what’s happening from week to week, which aids in budgeting.

Another benefit of having an automated grow system: He can make adjustments from anywhere he has an internet connection.

For example, the system Rayhorn uses allows him to adjust temperature or humidity levels from his couch at home.

“Being able to monitor and change the environment is great,” Rayhorn said.

Some systems allow monitoring remotely, but not all of them have the ability to make changes.

“It gives you peace of mind,” he added. “I don’t lose sleep about the environment.”

The technology Chalice Farms uses includes temperature sensors, humidistats and anemometers to measure wind for any outdoor plants. The sensors give out readings every three minutes.

The platform is customizable, and Rayhorn plans to add fertigation and soil-moisture sensors in the future.

He estimates that adding an automated irrigation system saves “quite a bit” of time and money.

“A worker would be watering plants all day long, and you could have the employee doing something else such as plant maintenance or cleaning,” Rayhorn said. “Watering is something that really needs to be automated.”

Several of the growers interviewed for this story cited their recent switch to LED lighting.

According to Lopez, the lights are doubling the size of his plants.

Aside from the gain in yield, the company also sees a “huge” cost savings on the energy side.

LEDs don’t emit as much heat as the high-pressure sodium bulbs the company was using, so the HVAC system doesn’t have to work as hard to keep indoor temperatures down.

“With these lights, we’re really going to hit our maximum potential and maximum yield,” Lopez said.

While energy-efficient lighting is a step up, technology that adjusts the height of the lights via computer or smartphone takes that to another level.

Rayhorn at Chalice Farms is experimenting with a lift system that hooks on to the top of the light so he can adjust it based on the particular plant strain and its growth patterns.

Sativa strains typically grow taller than indica strains, for instance, and with this system, he can have the two types of plants in the same room and make sure the lights are the correct distance from the top of each strain of plant.