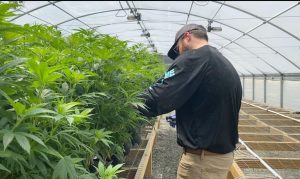 More than 300 insects, spiders and mites are found on or near cannabis plants.

While the vast majority of insects don’t cause economically significant damage, preventing a pest outbreak before it gets out of hand is the ultimate goal of an Integrated Pest Management (IPM) plan, according to Charlie McKenzie, founder of Florida-based CropWalk, a national IPM consultancy for high-value, controlled environment crops like cannabis.

“They are either not scouting at all because of the fear of not doing it right or not having it set up,” McKenzie said.

Crop scouting is more involved than walking the crop every so often and flagging a bug outbreak, McKenzie said.

Based in Gainesville, Florida, Konchan battles the state’s hot, humid and wet weather that favors pests and diseases.

Most cannabis growers outside Florida will have a shorter list of key pests, McKenzie said, usually at least five and not more than 10, including pathogens.

He advises reaching out to neighbors and state extension agents to ask what problem cannabis pests they have seen in the region.

Scouting crews should note sightings of occasional pests that generally don’t cause significant damage versus key pests if only so “you don’t worry yourself to death” concerned about a pest that ultimately won’t be a problem, McKenzie said.

Monitoring beneficial insects is another task for the scouting crew. Natural predator populations help growers understand if their management practices are working and determine the effectiveness of biological product applications.

Choose which data to collect

Growers need to know which data is important to collect and how to organize it, McKenzie said.

Specific data points to include:

There are also data points that a scouting crew doesn’t need to collect because they don’t trigger a response, McKenzie said, such as how many insects are on a leaf or exactly where a pest was spotted.

Growers should keep their scouting data organized and informative. Many growers use a numerical system of one through five to indicate the severity of an outbreak and letters to show what they are seeing. For example, 3E indicates a midrange population of pest eggs (E), whereas 5N notes a large population of pest nymphs (N).

Noting signs of pests versus symptoms of a pest outbreak are also important.

There’s a long list of tools and supplies a scouting crew needs. It comes down to “having the right tools for the job and knowing how to use them,” McKenzie said.

He recommends that every crop scouting crew member have:

McKenzie reminds growers not to scout the “same day of the week, at the same time and in the same pattern.”

Different insects are active at specific times of the day. If the crew always scouts the same weekday, they won’t get an accurate picture of the effectiveness of products applied earlier in the week.

Growers that have been in the crop a lot tend to become numb to new problems unless they walk a different route, McKenzie said.

“You don’t see the little details because you walk by the same way every time,” he added.

“The misinformation across the internet is rampant,” he said, and doesn’t contain much university-backed research to reference.

“The advice is horrible, or it is too broad. If I didn’t know what I was doing, I wouldn’t be able to do it well.”

“There is really no excuse we can’t be more on the point for IPM and what people should be doing.”