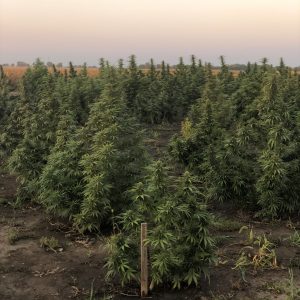 The number of hemp processors in Illinois doubled over the last year as the new industry tries to establish itself in a state that’s already an agricultural powerhouse.

Row crops are nothing new to growers in Illinois – one of the top corn-producing states in the country – but the infrastructure required to process hemp is still a work in progress. But there are signs of a maturing industry: Last year the state registered 362 hemp processors, up from 146 in 2019.

More people want to cultivate the crop, too, with 798 licensed growers in 2020, compared to 601 in 2019. Even so, agriculture officials expect to see a decrease from the 7,141 acres planted in 2019, as growers get a better sense of how much they really need to plant to suit their capacity and needs.

“That’s a trend that we’re seeing across the country as well,” said Phillip Alberti, educator for commercial agriculture at the University of Illinois Extension. Alberti said “growers are starting to kind of figure out that for high cannabinoid hemp, it’s very easy to plant more than you’re willing to handle or able to handle.”

The number of hemp acres planted in 2020 are not yet available.

Paul Grethey Jr., owner of Simple Livin’ Farms in Groveland, Illinois, has grown horticulture crops including ornamentals and vegetables, but said cultivating hemp was “the most fun” he has ever had.

“I’ve got 12 acres of the richest farm ground on the planet, and my goal has always been, ‘OK, how do I make more money than corn and soybeans off this valuable ground?” he said.

Grethey said he plans to grow hemp again this year. But for now, he’s still considering what to do with last year’s yield.

“With the processors in Illinois being so limited, there’s not a whole lot of options to choose from,” he said. “I’ve really been waiting for the proper opportunity to maximize the value of my product.”

Most of the hemp grown in Illinois is for cannabinoid extraction, but Rachel Berry, the founder and CEO of the Illinois Hemp Growers’ Association, predicts a shift to grain and fiber “once the industry catches up and there’s an outlet for farmers to send” their crop.

She said she has spoken to farmers who are interested in fiber and grain, “but they’re very apprehensive until they can get a contract and there’s nobody doing grain and fiber contracts in Illinois right now.”

Growing hemp for cannabinoids is time-consuming and expensive – hiring a processor, making sure the plant is below the 0.3%THC limit – and it may not be so appealing to some farmers.

“We’re used to growing row crops here,” Berry said. “So I think that traditional farmers – corn and soy farmers – will be more interested in something that is a little more straightforward.”

Alberti said among the things growers are learning is that hemp season can be long, depending on where you are in the state. That means growers can delay planting until June if the spring is particularly wet.

“You have to be aware of where you are in the state, what type of climate you have and the variety that you’re growing because all three of those factors kind of play into each other,” he said.