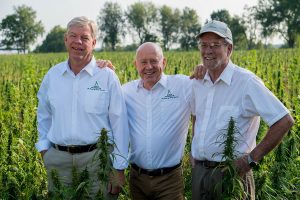 It was no ordinary White House news conference. It started with a video from the 2006 Emmy Awards of President Donald Trump singing the theme song from the 1960s sitcom “Green Acres,” which showcased a wealthy New York City couple who decamp to the countryside to operate a ramshackle farm.

Then Trump signed the 2018 Farm Bill.

Tucked in the $867 billion measure were seven words that forever changed the entire cannabis industry: “The term ‘marihuana’ does not include hemp.”

The landmark legislation, in short, removed hemp from the Controlled Substances Act.

It opens the door to billions of dollars in new sales for hemp companies – think CBD-infused beverages, foods and lotions plus hemp-related goodies such as seeds and energy bars as well as clothing – and the possibility of CBD further leaping out of dispensaries and headshops and into mainstream retail outlets and consumer packaged goods.

The Farm Bill means cannabis plants up to 0.3% THC are now as legal as corn or cotton, including CBD and other hemp extracts.

The bill’s seismic changes include several provisions that can benefit hemp and CBD companies as well as marijuana businesses keen on launching separate hemp operations.

For Joseph Hickey of Kentucky, the signing brings him full circle from the days his grandfather grew hemp in the 1940s, before the feds made it illegal in 1971.

Today, Hickey leads business development for one of Kentucky’s largest hemp producers, Atalo Holdings, which grew 2,716 acres of hemp in 2018 and plans to expand to 10,000 acres this year.

Hickey’s post-Farm Bill prediction: “You’re going to have farmers all over the country now starting to produce a CBD hemp crop. It’s going to be a flood.”

Though the groundbreaking law is still being parsed and questions remain about CBD’s future, here are some tips for how hemp entrepreneurs can capitalize on the Farm Bill’s passage.

Many of the changes promised in the Farm Bill won’t occur overnight. Crop insurance, for example, may take a few years to materialize – but it’s not too soon to begin looking into coverage.

Federally subsidized crop insurance is an unattainable cushion for marijuana producers, who have no public assistance when a crop goes moldy, is destroyed by a tornado or doesn’t produce.

Agriculture and insurance experts say the tantalizing prospect of government-subsidized crop insurance for hemp could be at least three to five years away.

That’s because insurers must first determine average hemp yields before being able to craft insurance policies.

Tyler Mark, agricultural economist at the University of Kentucky, said not all crops are insurable and it could be years before farm insurers settle on appropriate premiums.

“When it comes to hemp, insurance companies aren’t going to have any idea what an average yield should be,” Mark said.

“They’re going to need to see multiple years of data before hemp is a crop they’re able to insure.”

The USDA may decide that farmers who have been participating in state-level hemp pilot programs can use state harvest data to build a policy, given that the agency doesn’t yet have its own numbers. But that hasn’t been settled.

While hemp producers wait to see what crop insurance options might be available, they can still take steps to position themselves to buy crop insurance if they wish.

Mark laid out the first steps to getting federally subsidized crop insurance:

Banking Help on the Way

Fortunately for hemp businesses, banking and finance changes prompted by the Farm Bill are more certain.

Hemp cultivators, manufacturers and retailers can now access all the financial tools available to other small businesses – without the dreaded federal 280E tax restrictions that bar marijuana companies from taking traditional business deductions.

The change was immediate for Chase Terwilliger, CEO of CBDistillery, a Denver-based manufacturer of hemp-derived CBD.

Roughly 20 banks rejected Terwilliger’s company when he started it in 2016; after the Farm Bill’s signing, some of those same institutions called him back to offer accounts.

And after years of fighting high-fee credit card merchant processors, who took 16% or more of every transaction, Terwilliger says he’s getting offers below 5%.

“Our cash flow is finally back,” Terwilliger said. “We can hire more people, start to expand our workforce a little more as we prepare for even more massive growth.”

The Farm Bill’s passage also is welcome news for entrepreneurs such as Jay Hartenbach, CEO of Medterra, a CBD manufacturer in Irvine, California.

“I think you’re going to see a lot of banks get into this—banks that have been staying out—because of what the Farm Bill has done in terms of removing legal uncertainty,” Hartenbach said.

Covi, who works with businesses to reduce their tax burdens, laid out some basic federal tax tools to brush up on before sitting down with a tax expert:

Hope on the Horizon

The Farm Bill’s many implications will take years to play out.

The biggest challenge for hemp entrepreneurs may be surviving market volatility without losing focus on the plant and bringing it to the public.

“There’s this huge opportunity to jump on it now,” Medterra’s Hartenbach said. “People feel like they need to act now or never or grow their business.

“But I think doing things the right way, and not taking shortcuts, will really benefit them.”