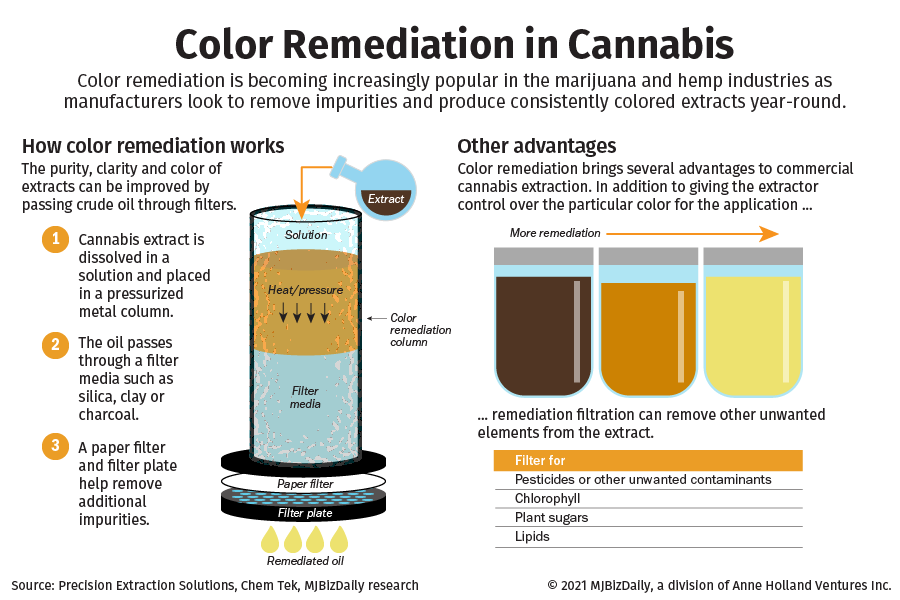 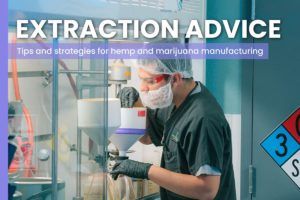 (This is the 11th installment in an ongoing series offering tips and advice for marijuana and hemp extraction companies. The 10th installment is available here.)

A process commonly used in food and wine production – color remediation – is becoming increasingly popular in hemp and marijuana extraction.

The extra step doesn’t cost much and can drastically improve the purity and clarity of extracts made with butane hash oil or ethanol solvents.

But the process is not without detractors who say it is too often used to remediate old or inferior cannabis inputs.

For Jorge Sanchez, co-founder of ChemTek, a San Diego company that makes cannabis filtration products, color remediation was inspired by his background in winemaking. Wine is commonly treated with enzymes or passed through filters to remove grape fragments and bacteria.

“This is done all the time with wine and with edible oils, like olive oil,” Sanchez said. “A lot of the equipment they use is identical to the equipment we use.

“So, when I got into the (cannabis) oil industry and saw that it was coming out dark, the thought came to my mind that I can probably pull this out with clay or minerals.”

In addition to giving the extractor control over the color, remediation filtration can remove:

But as more states legalized marijuana and nationwide hemp legalization sparked a CBD boom, the extraction side of the cannabis industry started getting a lot more crowded.

“There was never any reason to do it up until 2019, 2018,” said Harold Jarboe, co-founder of Tennessee Homegrown, which makes CBD and delta-8 THC products. “It was still a sellers’ market.

“Then the aesthetics came into it and people had this crude and thought, ‘What’s this really dark, greenish-black stuff?’ They started trying to clean it up.

“Gold is gold. The more it looks like a really great virgin olive oil, the more you can get a price for it.”

Color remediation is basically an extra step in closed-loop extraction.

A column is attached to the extraction equipment and filled with an absorbent filtering media. Common media include:

“You get a cleaner product and more efficacious product,” said Vince Sanders, founder and president of CBD American Shaman, which makes a house brand of CBD tinctures and has started using color remediation.

Choosing the right filter media, he said, is driven by the desired end product.

“Truthfully, it would come down to marketing,” he said.

Price is another factor.

Color remediation filters can cost from $5,000 to $20,000 and add time to the run, said Jeff Field, president and chief operating officer of Palmate, a CBD ingredient manufacturer in Tavares, Florida. His company employs four different types of color remediation.

“We can use all four stages or specific individual stages, as needed, to purify and polish our extracts to meet our customers’ desired specifications,” he said.

Despite advancements in color-remediation technology, the practice hasn’t washed out critics who say color remediation covers up crummy input.

“And when you have to start bleaching your crude, it means you’ve got (inferior) material.”

Sanders recalled making a CBD topical with an unappealing brownish color. When he started using color remediation to give the cream a whiter hue, more like conventional lotions without cannabinoids, some customers complained.

“All we did was remove the chlorophyll. That’s all we did,” Sanders said. “But it was interesting to note the power of the mind when we did that change.

“We had a number of people claiming the product did not work as well. Some people thought we had taken the CBD out or something.”

The larger the industry gets, the more common color remediation will be, Sanchez predicts.

Just like commercial beer and wine is clearer and more consistent than beer or wine made at home by hobbyists, commercial cannabis extracts will lose the muddiness and batch-to-batch variance seen in craft production.

“In the last couple years, it has spread like wildfire. Basically everybody has started to look into how to clean the oil,” Sanchez said.