Don’t miss MJBizCon 2020 for more discussion on the UN vote and what it means for the global cannabis industry.

This story has been updated with comments from voting nations.

The United Nations Commission on Narcotic Drugs has overwhelmingly rejected a proposal to exempt CBD preparations with less than 0.2% THC from international control.

The rejection came Wednesday during a landmark vote on changing the way that cannabis is scheduled in two drug treaties.

The 53 member nations of the U.N.’s main drug policymaking body met in Vienna to vote on six World Health Organization recommendations for changing the way that cannabis and related substances are scheduled in two international drug treaties.

The United States, the UK, Colombia and Germany were among the broad coalition of 43 countries that voted against proposal known as Recommendation 5.5, which would have added a footnote to the 1961 Single Convention on Narcotic Drugs that sets out a THC threshold for “predominantly” CBD preparations.

Six nations voted in favor of the CBD footnote, while four others abstained.

Delegates for several nations, including the United States and Germany on behalf of the European Union, cited the proposal’s unclear wording and its departure from drug treaty norms when explaining their dissenting votes but signaled a willingness to revisit the issue.

“The establishment of the 0.2% THC limit is not supported by scientific evidence, and the proposed wording does not exclude divergent interpretations concerning the calculation of that limit,” said Ambassador Gerhard Kuentzle, Germany’s permanent representative to the Office of the United Nations in Vienna.

“The recommendation as it has been drafted does not offer the necessary legal certainty and does not constitute a proper solution for cannabidiol,” Kuentzle said.

“However, we would welcome further consultation with all relevant stakeholders on the recommendation on the appropriate level of the international control for cannabis preparations with low THC content,” he added.

The reasoning offered by the United States to explain its dissenting vote in the post-vote commentary focused on “legal and procedural grounds.”

“We did not dispute the scientific basis for the recommendation,” said Ethan Glick, U.S. counselor for UN affairs at the U.S. Mission to International Organizations in Vienna. “Cannabidiol has not demonstrated abuse potential, and it is not our position that cannabidiol should be or is under the control of the international drug conventions.”

“Substances are presumed to be outside the scope of the conventions unless explicitly included in a schedule,” he continued. “This recommendation … breaks from past procedure and intrudes on the treaty-based mandate of the CND to make recommendations for the implementation of the aims and provisions of the drug control conventions.”

In the UK, the recommendation would have conflicted with existing legislation, Ambassador and Permanent Representative Corinne Kitsell said. She also noted that the country objected to the threshold chosen for THC.

Canada’s Paul Williams, the first secretary for his country’s Permanent Mission to the United Nations, echoed his U.S. peer in acknowledging that Recommendation 5.5 was supported by scientific evidence, and that “CBD does not satisfy the criteria for international control under the drug conventions which are concerned with the risk of abuse and dependence.”

Williams recalled several member states’ concern over the use of a footnote to clarify this situation.

“Canada suggests that the WHO recommendation would likely meet with greater support if it were reformulated to align with the structure and purpose of the convention,” Williams said.

The recommendation represented a missed opportunity to clarify the confusing legal situation for CBD preparations with traces of THC, but commentaries from CND members indicated that the proposal was drafted in an ambiguous way, and the WHO’s responses to member states’ questions about the recommendation over the past two years had created additional confusion.

The rejection of Recommendation 5.5 came after the CND voted in favor of removing cannabis from Schedule IV of the same treaty, a largely symbolic move that could nevertheless have far-reaching implications for regulatory oversight and scientific research within the medical cannabis industry.

A slim majority of 27 countries on the CND accepted Recommendation 5.1 to remove cannabis and cannabis resin from Schedule IV of the 1961 Single Convention on Narcotic Drugs. Twenty-five voted against, and one abstained.

Drugs in Schedule IV of the 1961 treaty – where, until Wednesday, cannabis sat alongside heroin – are a subset of those already in Schedule I.

Schedule I – which includes fentanyl – already requires the highest levels of international control. 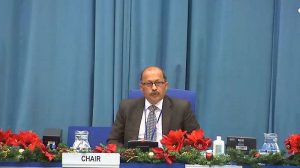 The removal of cannabis from Schedule IV carries broad symbolic significance for medical cannabis, as it could help boost medical cannabis legalization efforts around the globe now that the CND tacitly acknowledges the medical utility of the drug.

“The medical cannabis wave has accelerated in recent years already, but this will give it another boost,” Martin Jelsma, drugs and democracy program director at the Netherlands-based Transnational Institute, told Hemp Industry Daily.

“And for those countries that basically mirror the U.N. scheduling in their domestic legislation, it may lead to national descheduling and remove obstacles to use cannabis for medical and research purposes.”

The CND is the main drug policymaking body within the United Nations.