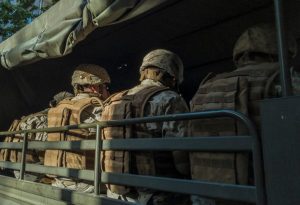 The U.S. military and researchers at a Wisconsin university are discussing making hemp fiber to replace imported polyester and polymer in Army vehicles – a potential partnership that would return the state to the days it was the epicenter of fiber production during both World Wars.

To make it a reality, researchers at the University of Wisconsin-Stevens Point are working to create a textile that the military can test. Two state lawmakers, meanwhile, are leading the charge to pass legislation that would grant $250,000 to the research effort.

“Let’s reposition Wisconsin as the No. 1 hemp fiber state in the nation,” said Paul Fowler, executive director of the Wisconsin Institute for Sustainable Technology at UW-Stevens Point. “Let’s make sure that we’re using the entire plant and all the potential that it has built in.”

Most U.S growers raise hemp to create CBD products, but the plant can be transformed for many uses.

The military wants to use it for seat belts, seat covers or uniforms because officials believe hemp fiber material can be safer and more durable – and it can be made in the United States as opposed to imported from other countries during geopolitical tensions. That’s according to Fowler and two state lawmakers who talked with representatives from the U.S. Department of Defense in early February.

The sponsor of the legislation to allocate $250,000 for research, state Rep. Tony Kurtz, is an organic grain farmer and former U.S. Army attack helicopter pilot who fought in Iraq. In his last assignment, he investigated military aircraft accidents.

Kurtz said the Army and other branches are interested in fiber from hemp because currently the polyester blend used in their vehicles, aircraft and uniforms has serious drawbacks.

“One, it actually has like a shiny tint to it and the enemy can actually see that shine from far distances,” he said.

“The other thing with polyester … when polyester burns, it shrinks, and it shrinks into bare skin. And so many, many soldiers and many, many Marines over the last several years in Iraq and Afghanistan who wore polyester and were involved in perhaps an IED (roadside bomb) blast or some other type of explosion, that material would literally melt into your skin.”

“Hemp is obviously similar – and I think a lot stronger than cotton,” Kurtz said.

The Army did not immediately respond to Hemp Industry Daily‘s request for comment on this research.

The $250,000 would go into the Hemp Fiber Innovation and Technology Accelerator, to be run by Fowler’s department. Half the money would come from the state and the remainder from private donations.

Fowler said his department is working on designing textiles that would be radiation- and fire-resistant.

The bill, however, will have to wait until next year. That’s because it didn’t garner enough support this session amid falling CBD oil prices, which prompted caution and skepticism from some lawmakers.

Kurtz and his co-sponsor, state Sen. Patrick Testin, said they will continue pushing the bill. Even if the state doesn’t provide funding, he said, the private sector will because there’s enough interest by the military.

“I do think there is an interest, and I’m really encouraged by that – that the Department of Defense could potentially see this as a viable option that we can grow right here in the U.S.,” Testin told Hemp Industry Daily.

Another factor driving the military’s interest in finding reliable hemp fiber is that President Donald Trump has said he’ll increase enforcement of the Buy American Act, a 1933 law to emphasize more manufacturing in the U.S.

As it stands, the U.S. imports a lot of textiles from China, Kurtz said.

Reason to be optimistic

Back when the U.S. was producing World War II films such as “Hemp for Victory” to promote the plant’s production, Wisconsin farmers were featured prominently, according to Wisconsin Magazine of History. By then, Wisconsin was the country’s leader in hemp acreage and fiber production.

Testin said there’s “reason to be optimistic about the potential for this crop” and the potential benefit for farmers in Wisconsin and across the country.

“We could be growing a plant much like we did back in World War I and World War II that could help our troops fight and serve overseas,” Testin said.