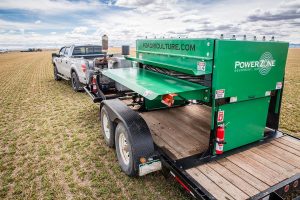 The Fiber X Genesis decorticator, a smaller version of Power Zone's Model 672 above, is planned for the HempHub program. (Photo courtesy of Power Zone Agriculture)

If hemp fiber is so strong and easy to grow, why is so much of it moldering in barns awaiting a buyer?

Two hemp companies say they have the answer, and they plan to bring it to farmers who can’t find buyers for hemp’s tough stalks.

HempLogic in Washington state and Power Zone Agriculture in Colorado plan to load mobile decortication machines onto trucks and then take the equipment on a 20-state tour of hemp farms.

The companies are calling the tour HempHub.

Making it profitable to turn hemp stalks into usable manufacturing material, a prospect that currently eludes most hemp producers in the United States.

“When you put fiber on a truck, when it goes any distance past 100 miles, any profit is gone,” said Cory Sharp, CEO of HempLogic, in Moses Lake, Washington.

“That’s been the killer of the hemp market.”

Sharp, who grows and processes hemp, says the dearth of processing has kept the U.S. hemp industry limited to mostly seed and CBD production.

It’s simply not economical to move hemp from Canada or the United States to large textile manufacturers overseas.

Another big obstacle in producing any type of textile crop is finding an industrial decorticator, which strips the softer outer bark, or fiber, from the woodier core of the plant known as the hurd.

The machine costs about $2 million to $2.5 million, processes 10 tons of hemp an hour and can be transported by trucks.

Right now, the only mobile decorticators in the United States are fed by hand and therefore limited when it takes tens of thousands of acres to produce profitable hemp fiber.

“This is a game changer,” said Corbett Hefner, vice president of research and development for Power Zone.

The company plans to sell up to 15 decorticators in addition to the traveling HempHub in 2018.

“If you talk to anybody in the hemp industry,” Hefner added, “they’ll tell you there’s a huge disconnect between the producer and the end user.

“We just don’t have the processing.”

Here’s how the HempHub will work (times and locations haven’t been determined):

“We’re going to work with everybody to get them paid what we can,” said Sharp, who believes he could process and sell 10,000 acres worth of hemp fiber in 2018 – more than the United States is currently growing.

The decorticator won’t fix all the hemp industry’s processing issues.

But the HempHub could change an American hemp market that’s currently limited by a lack of processors, said Geoff Whaling, head of the National Hemp Association.

“We are going to need multiple decortication solutions, but this could certainly be one of them,” said Whaling, who is not involved with the HempHub project.

Sharp is bullish on the prospects for growing the anemic U.S. hemp fiber market.

“I’ve got buyers all lined up. People are interested in this market, and they’re willing to pay,” Sharp said. “The problem is, they just can’t get it.

“This won’t solve all problems, but it’ll get the hemp industry one step closer.”