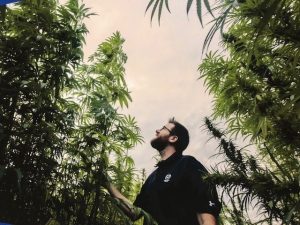 Hemp isn’t as immune to drought as supporters claim, according to a Colorado State University soil researcher who analyzed two years of Colorado hemp production.

“There are a lot of myths about this crop, and one of them is that it doesn’t need much water,” said Brian Campbell, a doctoral student in Soil and Crop Sciences who monitored hemp’s water use on two Colorado plots in 2015 and 2016.

Campbell saw his hemp plants – some seed varieties and some fiber varieties – struggle without irrigation.

“It’s not that the plant won’t grow” without much water, Campbell explained.

“But it’s a no-brainer – you should irrigate your hemp plants if you want them to do well in Colorado.”

He presented his findings last month at the Institute of Cannabis Research conference at Colorado State University-Pueblo. He’s awaiting publication in an agronomic journal.

Campbell found that hemp’s reputation as a good dryland crop – meaning a crop grown without irrigation – isn’t deserved in areas without abundant rainfall.

“I’ve heard a lot of people promoting hemp as a low-water-use crop, and from what I’ve seen, it’s pretty high compared to other crops,” said Campbell, who specializes in specialty oilseed crops. “I wouldn’t suggest dryland cultivation here without irrigation.”

Campbell’s water research is among the first studies to apply modern large-scale farming methods to a crop still shrouded in mystery. Decades of illegality for hemp production has left the crop way behind other commodity crops in terms of what agronomists know about how to grow it profitably.

Purdue University’s Hemp Project reports that most varieties of hemp need about 25-30 inches of rain a year, especially in the early weeks of life. But that’s about as exhaustive as university research into hemp and water use goes.

Purdue’s research also applies only to the American Midwest, and researchers warn that the hemp industry is plagued by “large information gaps that have developed with regards to production, pest management and economic impact.”

Campbell’s work resonated with some Colorado hemp farmers who attended the conference.

“You definitely need to do some irrigation,” said Bridget Gay, who grows and processes 50 acres of CBD-rich hemp in central Colorado for her company, High Country Lab.

Gay has grown hemp since 2015 and has learned through trial and error that her hemp plants need roughly 6 gallons of water per week to thrive.

“It doesn’t grow on its own unless you’re by a stream,” she said.

Campbell noted that he researched seed and fiber varieties, not the flower varieties grown by Gay and most other hemp farmers. Campbell pointed out that much more research needs to be done around growing CBD varieties of hemp.

“Cropping for CBD, there’s nothing out there” to tell farmers how much water they need, Campbell said. “It’s all shooting in the dark right now.”