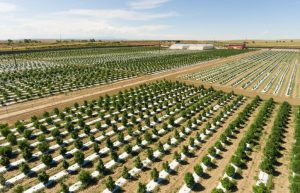 Colorado has a new plan to address cross-pollination concerns among outdoor hemp and marijuana growers.

The law also aims to help outdoor marijuana cultivators respond to adverse weather by loosening rules on relocating plants and storing them in facilities not licensed for marijuana.

The pollen-drift working group will discuss cross-pollination, where a field of female plants – marijuana or hemp – is inadvertently pollinated by a neighboring crop of male plants, spelling disaster because it dramatically lowers cannabinoid production.

And this isn’t a marijuana-versus-hemp situation.

Hemp growers targeting the seed, grain and fiber markets could inadvertently pollinate hemp cultivators growing only for CBD just as easily as they could THC marijuana growers.

Last year Colorado licensed 981 hemp farmers on 36,225 outdoor acres. State analysts estimate the state has 120 outdoor growers of medical or recreational marijuana. (Colorado’s marijuana regulators do not keep track of which registrants are growing outdoors, making the number an estimate.)

Although there aren’t many clear fixes, the working group is an important step in solving this difficult problem.

“The beauty is to gather the experts,” said Rick Trojan, vice president of the Hemp Industries Association and a hemp grower based in Denver.

He suggested that state regulators could require cultivators to stagger their growing cycles so that the seed-producing plants aren’t harvested at the same time as the feminized plants.

But the logistics of doing that would be difficult to work out.

Buffers are also often brought up as a possible fix. But pollen can travel miles and has been known to even infiltrate indoor cannabis operations.

Henry Baskerville, managing partner of Denver-based Fortis Law Partners, pointed out that the majority of hemp being grown in Colorado is for CBD production and therefore needs protection.

He suggested that marijuana and hemp farmers need to be closely involved in discussions to help shape the legislation, “as they’re the ones who understand the issue the best.”

The working group is required to include more than 15 members, including hemp and marijuana growers.

Kim Stuck, founder of cannabis consultancy Allay Consulting, which has offices in Denver and Portland, Oregon, said it looked to be a diverse group.

“Without having farmers involved in this conversation, they were going to do the wrong thing, and they know it,” she said.

“If Colorado wants to be a leader in hemp and cannabis cultivation, we need to figure out how these plants can coexist side by side,” Wellington said.

“The state that figures this out will have a significant advantage.”

Read more about the law’s marijuana-specific provisions at MJBizDaily.