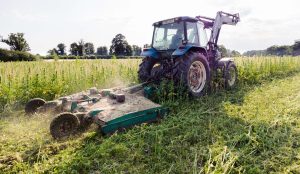 The case of Hempen, the United Kingdom’s not-for-profit farming cooperative, illustrates the extra hurdles British hemp farmers face in not being able to use the flower, the most valuable part of their crop.

Based in Oxfordshire, Hempen had been growing hemp since 2015. And, until last year, the harvest was used to manufacture and sell CBD products.

But the cooperative announced last week that U.K. authorities revoked its license to grow hemp. In response, the company was advised by legal counsel to plow under its 40-acre crop in central England, which it did.

According to Hempen, the crop destruction means lost revenue of at least 200,000 euros ($244,000), a figure that’s derived from the crop’s potential for seed oil and protein powder.

Hempen said that if it had it been able to harvest the flower to manufacture CBD products, the loss would have ballooned to 2.4 million euros in potential revenue.

In the U.K., a license from the Home Office is required to grow hemp. The fee for new applications is 580 euros, with renewals costing 326 euros.

Last November, the Home Office published a fact sheet stating that licenses “may be issued for the cultivation of cannabis plants with a low tetrahydrocannabinol (THC) content for the production of hemp fiber for industrial purposes or the obtaining of seeds which are then pressed for their oil.”

The fact sheet also clarified that the policy “does not allow for use of ‘green’ material – i.e., the leaves and flowers, as these are controlled parts of the plant.”

Hempen had been using that very part of the plant for years.

“Hemp is an incredible economic and ecological opportunity, yet the U.K. government seems to see it as a problem. The crop destruction is financially devastating and also has an impact on our community,” Ali Silk, a Hempen co-operative member, told Hemp Industry Daily.

“The fact that British farmers are being excluded from the … U.K. CBD industry is a huge barrier for growth,” Loxley said. “The BHA and its members are working hard to develop trust and transparency with a focus on enhancing the domestic value chain.”

To minimize the economic harm, Hempen announced it will now import CBD from other European countries to continue to supply the U.K. market with CBD products.

Pure CBD is not a controlled substance in the U.K. unless it is combined with THC. (The country’s 0.2% THC limit applies only for the hemp varieties grown with a license, not for final products.)

Looking to the EU

Even products with pure CBD don’t have much legal protection because CBD was included in the European Union’s novel food catalog last January.

Substances included on this list are defined as “food that had not been consumed to a significant degree by humans in the EU before 15 May 1997, when the first regulation on novel food came into force.”

In the U.K., the Food Standards Agency accepted “the clarification from the EU that CBD extracts are considered novel foods” but is committed to find a “proportionate way forward by working with local authorities, businesses and consumers to clarify how to achieve compliance in the marketplace in a proportionate manner.”

In neighboring Germany, the Federal Office of Consumer Protection and Food Safety stressed that CBD products need authorization either as medicine or novel food. The agency also noted that, as far as it knows, no CBD product currently has authorization to be sold as food.