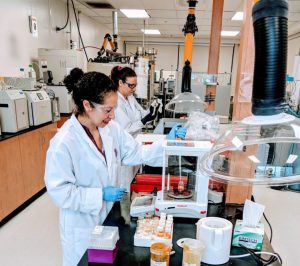 Cannabis lab technicians can make the perfect oil, but the accompanying hardware needs to be on par for the customer to have a quality experience. (Photo courtesy of The Blinc Group)

(This story appears in the October issue of Marijuana Business Magazine.)

Cannabis extraction companies labor over making perfectly flavorful and potent oil. But if that oil ends up in poor-performing or otherwise substandard hardware, consumers won’t buy it again.

“The key consideration in sourcing a component for our vaporizers is clarity,” said Jamie Rosen, CEO and founder of Las Vegas-based Dr. Dabber, a CBD vaporizer company. “It is crucial our suppliers are clear on Dr. Dabber’s quality requirements and the design of the components.”

Cheaper hardware can break, leak and—even worse—release harmful toxins such as heavy metals into the oil that consumers vape.

He prefers stainless steel in all the places where oil interacts with the vape pen’s components because oil can’t leech harmful toxins from the corrosion-resistant metal.

The molds used to create glass vape cartridges can be made of lead, Dumas de Rauly said. If the supplier doesn’t properly clean the glass particles, lead could still be present in the cartridge and get into the oil.

“It’s really about understanding where all this material comes from,” he added.

A company might save 10 cents buying cheaper hardware, but it will also lack control over the end product.

Dumas de Rauly also recommends buying from a domestic company so that if something does go wrong, it’s easier to communicate with the business about problems.

Rosen considers design, manufacturability and the function of each component before he begins sourcing vape hardware.

“We’re striving for a perfect product in our customers’ eyes but at a price that is also deemed affordable,” he said.

Since each component is part of the product design, if one component has manufacturing issues and requires a redesign, several other components might also need to be redesigned as well.

“We can determine a component’s approximate cost based on the material selection,” he said 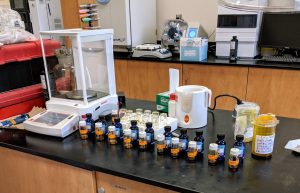 Vetting and testing materials is paramount because vaping hardware can add toxins to cannabis oil. (Photo courtesy The Blinc Group)

Each component has strict requirements that must be met, significantly impacting the final price, Rosen added. Those include goals in defect rates, requirements for materials that are in contact with concentrates and function requirements.

Richard Huang, CEO of Cloudious9, a cannabis vaporizer manufacturer based in Hayward, California, said his due diligence process includes making sure the company’s raw-goods providers pass a database screening, open-source review and reputation review as well as have the correct supply-chain documentation, on-site inspections where applicable, corporate documents and any independently verified raw-goods certifications.

“It becomes very clear which raw-good providers have the best quality based upon the standards that we have set,” he said. “We always select our raw goods based upon quality, not price.”

While other materials might be cheaper, Dumas de Rauly recommends ceramic components to create medical-grade products as well as coils made from quartz and carbon.

Those materials cost more—maybe $1.80 versus $1.60 per unit for cheaper materials—but they keep the oil stable and don’t add toxins.

Rosen said high-quality steel is the easiest material to work with.

“Steel is relatively easy to machine, can be made in all shapes and can be fitted together with a wide range of other components,” he said.

Stainless steel also can be medical grade for use in vape products and contact with concentrates.

Rosen has found that cartridges with a large, open mouth are easiest to fill. His company’s cartridges have both an upper and lower assembly, with the lower assembly being composed mostly of the reservoir tank, which can be easily filled before the upper assembly is installed.

For Dumas de Rauly, making sure the hardware supplier has a redundant supply chain is very important.

With each raw material, his company has two major suppliers and two minor suppliers.

“You need to have control of the supply chain,” Dumas de Rauly emphasized.

Rosen said COVID-19 significantly impacted his company’s suppliers, prohibiting them from being able to manufacture for some time.

“As soon as our suppliers were allowed to be operational, we were able to get our orders on top of their lists due to our relationships with them,” he said.

While the company has redundancy for several components in the supply chain, Rosen prefers critical components that include intellectual property be kept to a single supplier in an effort to protect confidential information.

According to Huang, the coronavirus pandemic “greatly affected” international shipping because of the massive decrease in air travel, which drastically affected air freight costs.

Customs offices around the world began prioritizing PPE shipments, he said, resulting in large backlogs of normal items and slowing the arrival of Cloudious9’s finished goods.

“We are in the process of building redundancy for the future by doubling our inventory held locally,” Huang said.

He tests products after a couple of days, then a week, two weeks, a month, two months and three months before he’s satisfied the hardware is performing correctly and not leeching heavy metals.

“The biggest concern we have for long-term storage will always be contamination of the concentrate, either from the cartridge itself or from the environment it is stored in,” he said.

Environmental factors such as temperature, humidity and elevation must be considered along with the type of oil.

The company’s CBD cartridges, for example, include silicone seals and medical-grade hardware to help prevent oxidation and water vapor from humidity impacting the CBD oil.

The cartridges are also designed with medical-grade materials to ensure no leaking or corrosion occurs from the CBD oils.

“The biggest consideration for long-term storage of cannabis oil in vape pens is leeching,” Huang said. According to Huang, a large number of disposable vape pens and carts out in the marketplace are substandard and have already resulted in heavy metals or other contaminants leeching into cannabis oil.

“Luckily for the consumer,” he added, “most legal markets have recognized this problem and are testing for heavy-metal leeching.”

Bart Schaneman can be reached at [email protected]bizdaily.com