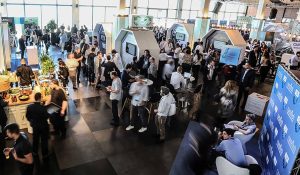 The CannaTech medical cannabis innovation conference was postponed until June 15-16 because of coronavirus concerns. (Photo courtesy of CannaTech)

Some U.S. and international cannabis industry conferences and trade shows – important for marijuana and hemp businesses to market their products and cultivate relationships with vendors and buyers – are feeling the fallout from coronavirus fears.

So far, a small number of cannabis-related business events in this country and overseas have been canceled or postponed. Other cannabis event organizers are proceeding with their plans but monitoring the global outbreak of the coronavirus.

The decision to postpone or cancel events has upended the business and travel plans of scores of marijuana and hemp companies, forcing cannabis businesses to rethink their conference plans and – in at least one case – retrieve equipment that already had been shipped to a venue.

Natural Products Expo West, which included a number of CBD exhibitors, on Monday abruptly postponed its 2020 event in Anaheim, California, after a huge number of registered exhibitors and attendees announced plans to drop out because of coronavirus concerns. The event was scheduled to start Tuesday.

CannaTech, a prestigious event focused on medical cannabis innovation scheduled to begin March 30 in Tel Aviv, Israel, announced plans Tuesday to postpone its event until mid-June, citing recommendations from the Israeli Ministry of Health, the World Health Organization and the Centers for Disease Control and Prevention.

“Our No. 1 concern is the health and safety of our attendees and speakers, our partners, our colleagues and our vendors,” Saul Kaye, CEO of iCAN: Israel-Cannabis, said in announcing the decision. The company owns the conference.

“While we are disappointed to postpone both CannaTech Tel Aviv and PsyTech Summit, we are very confident it will be worth the wait,” Kaye added. Marijuana Business Daily is a media partner of CannaTech events globally.

All eyes on SXSW

Industry executives are now watching the gigantic South by Southwest event in Austin, Texas, which has a cannabis business track that includes speakers from Hemp Industry Daily and parent publication Marijuana Business Daily.

Smaller events also are being affected: The California Cannabis Industry Association has postponed its annual policy conference in Sacramento, scheduled for March 18. CCIA also cited the coronavirus outbreak, although the postponement comes at a time that the trade group is under attack from unions.

Thus far, many other events in the marijuana/hemp space are scheduled to proceed as planned, but organizers and attendees are monitoring the situation and in some cases speakers and others have dropped out as mainstream and cannabis event postponements pile up.

Much will likely depend on an event’s location, its size and whether it’s regional, countrywide or international in scope.

Chris Walsh, CEO and president of MJBizDaily, said that as of now the company is proceeding with its upcoming events as planned.

This includes the Investor Intelligence Symposium in New York City in April, the European Cannabis Symposium in Copenhagen in May, MJBizConNEXT and the Hemp Industry Daily Conference in New Orleans in June as well as MJBizCon in Las Vegas in December.

But he said the company is closely monitoring the situation with public health and safety in mind and will communicate with attendees and exhibitors if anything changes.

“We realize how important these are for companies in the industry,” Walsh said. “For a lot of companies, this is their primary way of marketing, finding vendor relationships and growing their business.”

The decision to postpone this week’s Natural Products Expo West has proved costly for some companies.

Colorado-based Moon Mother Hemp, a producer of CBD-infused wellness supplements, spent thousands of dollars shipping a crate full of booth equipment to Anaheim for the event, according to co-founder Jessica Bates.

“As a brand owner, we’re extremely disappointed,” Bates said of the postponement. “These trade shows are crucial for us as far as access goes.

“It’s an opportunity for us to meet with a multitude of buyers all at once.”

Yet, Bates said she supports postponing the event. As a wellness company, she said Moon Mother wouldn’t want to put the health of attendees, exhibitors or buyers in jeopardy.

Victory Hemp Foods, a Kentucky company that produces hemp concentrates for the food, beverage, pet and wellness industries, dropped out of Expo West because of coronavirus concerns.

That decision was difficult, however, because the company tries to attend as many food technology events as it can, said Aleah Rouse, Victory Hemp’s director of marketing.

While people talk about declining trade show attendance in general, such events are essential for young cannabis companies, she said.

“Being at these trade shows, we can talk about our products, people can taste our products and we form personal relationships” with potential customers, Rouse said. “It’s a source of new business.”

Victory Hemp and Moon Mother Hemp at this point are still planning to attend the prominent NoCo Hemp Expo in Denver March 26-28.

(Moon Mother Hemp plans to ship its booth equipment from Anaheim to Colorado for the NoCo Hemp Expo, then back to Expo West if it is rescheduled.)

Morris Beegle, founder of the NoCo Hemp Expo and owner of the Colorado Hemp Co., said he “is moving forward as if the show is going to happen.”

He is concerned about public safety, however, and is in touch with local health officials. The event page posted safety tips about the virus and is asking folks to stay home if they feel sick.

A Canadian woman scheduled to speak at the NoCo Hemp Expo canceled Tuesday because of coronavirus concerns, but Beegle said she’s the first speaker to pull out. NoCo has 400 exhibitors lined up, and the space is sold out with a waiting list, he said.

Beegle said he’s closely monitoring SXSW but added, “I think this is fear- and panic-driven (at this point), I don’t think there’s a reason for shows to start canceling in the U.S.”

He described both hemp and marijuana shows as incredibly important for businesses, perhaps more important than in other industries.

“These big shows are one of the best places for the industry to advertise what they’re doing and to do business together,” Beegle said.

While Marijuana Business Daily and Hemp Industry Daily have received some coronavirus-related questions, it also has received some positive signs, Walsh said, such as exhibitors from Asia locking up their space now for MJBizCon.

But Hemp Industry Daily always thinks about contingency plans such as virtual events and webinars if outside factors such as a public health outbreak prevent an event from occurring, he added.

“We have a lot of options going forward,” Walsh said, “and absolutely we are diving into all of those scenarios.”