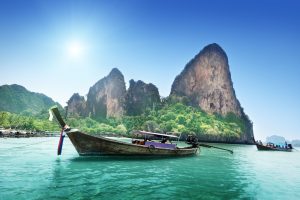 A proposed revision to Thailand’s notoriously strict narcotics law would ultimately permit the cultivation and use of medical cannabis across the Asian country.

The draft text – completed in late 2017 and currently under review by the Office of the Council of State – would have to be sent to the nation’s Cabinet for approval.

After that, the revision would face a vote in Thailand’s National Assembly.

If written into law, the revised regulations would eventually make Thailand “a medical marijuana hub” in the region, according to Agencia Efe.

The proposed rules would allow cannabis to be sold legally over the counter with a doctor’s prescription, Narcotics Control Board director Sirinya Sitdhichai told Thailand’s Khaosod newspaper.

“For medical purposes, they will be able to get the marijuana, but only on a doctor’s orders,” Sirinya said. “They can’t grow it on their own.

“This is what we have put in the draft.”

Hemp cultivation was allowed in 23 designated districts in nine of Thailand’s provinces last year, according to the Bangkok Post, but only after receiving approval and under the supervision of provincial narcotics control authorities.

Last summer, a committee chaired by the Deputy Justice Secretary Pol Col Dusadee Arayawuth agreed to reclassify cannabis to the controlled narcotics list’s fifth tier to pave the way for its eventual use in medical research.

A revised narcotics law to allow recreational cannabis use is not under consideration.