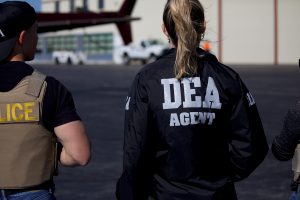 (This story has been updated with the DEA’s response on finding a testing lab.)

Hemp farmers and industry advocates are alarmed that federal agriculture officials have brought drug enforcement back into the fold to ensure that cannabis produced for hemp in the United States does not exceed the acceptable limit of 0.3% THC.

The U.S. Department of Agriculture’s interim federal rules for hemp production, released Oct. 31, require that only laboratories registered with the U.S. Drug Enforcement Administration (DEA) will be qualified to conduct THC testing of hemp crops.

“It appears that many of the existing (DEA) labs don’t have the equipment and capacity to service the hemp industry,” cannabis attorney Shawn Hauser of Denver-based firm Vicente Sederberg said last week during a webcast with Hemp Industry Daily.

The rules propose that the U.S. Department of Agriculture (USDA) may establish an approval process for labs that want to offer THC testing services. Those labs would need certification by the International Organization for Standardization (ISO), which could be a suitable alternative, according to Hauser.

If the USDA chooses to approve testing labs, it could accredit laboratories that perform to a certain quality, in addition to requiring a particular ISO accreditation.

This is a departure for the DEA, which does not require labs to be accredited to handle narcotics. However, the USDA-approved labs would still have to be registered with the DEA.

The alternate testing protocol “would give USDA the proper oversight of the laboratories doing the testing, providing quality assurance and control procedures that ensure a validated and qualified analysis, and defensible data,” the interim rules state.

The USDA is requesting comments on the requirements for laboratories and will likely need to make changes regarding this issue, Hauser said.

The rules state that DEA-registered labs – and, potentially, USDA-approved labs – will ultimately be listed on the Agriculture Department’s Domestic Hemp Production website.

“DEA is still working through many of these details with USDA,” Pfaff wrote in an email to Hemp Industry Daily, which asked about the testing plans.

“We do not release information about specific DEA registrants, so we do not provide a list of labs registered with the DEA.”

Meanwhile, laboratories looking for information on becoming DEA-registered to perform chemical analysis should visit the DEA Diversion Control Division website to apply for an analytical lab registration. Form DEA-225 should be used, according to Pfaff.

For some, the idea that the DEA is involved at all is upsetting.

Denver attorney Frank Robison said he counted the number of times DEA was mentioned in the rule. By his calculation, the agency had 42 mentions, compared with two references about banking.

“It just shows that the priorities within the rule are skewed against the farmer in a way that would prohibit and restrict commerce as opposed to promoting commerce,” Robison told Hemp Industry Daily.

“And, in my view, the intent of Congress is to promote a commercial environment and commercial industry for hemp.

“We’re worried about 1,000 parts-per-million THC, when we should be worried about getting this industry off the ground and helping American farmers, providing them access to capital and making sure that their crops are insured.”

Hemp industry consultant Ryan Pettigrew said it makes sense the DEA would be involved, considering that crops testing hot would technically be marijuana, which remains a Schedule 1 drug on the controlled substances list.

“That one was obvious – there was really no argument to it,” Pettigrew told Hemp Industry Daily.

“Granted, in a perfect world, they would just deregulate everything,” he continued. “But that’s just not going to happen.”

The USDA predicted that about 20% of hemp samples collected in 2020 would exceed the 0.3% THC limit and need to be destroyed. The USDA rule lays out no plan to appeal testing results.

Robison contends that for the micro levels of THC involved with hemp production, the USDA shouldn’t have to involve drug law enforcement.

“The USDA should have the capacity to manage 1,000 parts-per-million THC,” Robison said.

The DEA should be focusing on drug criminals, not farmers, he said.

“The folks that know how to work with crops are the people that should be managing the data and working with these farmers, not a law enforcement agency charged with pursuing crystal meth and fentanyl criminals,” Robison said. “They should not be even in the same ballpark.”

Further, he continued, the U.S. Congress did not mean to scare farmers and put them on a watch list, but that’s the message the USDA rules send.

Legitimate American farmers may have been sold “bogus seeds” or seeds that tested below 0.2% THC in Europe but went hot when grown in a warmer U.S. climate, he said.

“Now, all of the sudden, because they wanted to be part of this congressionally opened-up market, why now are they in a DEA database?” Robison said.

“Congress passed a law to promote the hemp industry in the United States of America,” he said.

“The regs that just came down, the No. 1 thing that they accomplished, if I was a farmer, was to scare me and to provide me with a doubt of whether I should be entering this market until there is additional clarity about whether or not I’m committing a criminal activity.”