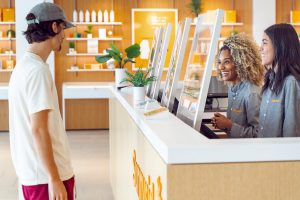 This story appears in the April issue of Marijuana Business Magazine.

You’ve found the perfect location and designed your dream dispensary—now it’s time to recruit the staff who will bring your store to life.

Exact strategies will vary based on a retailer’s size and resources, the local labor pool and available time. But a few basic tips can help you find the employees your store needs to succeed.

Recruitment can be time-consuming even in the age of online job boards, said Alison McMahon, CEO of Cannabis At Work, a marijuana human-resources and recruitment company based in Edmonton, Alberta.

“Usually, people are reaching out to us because they have a lot of different priorities, and something has to give somewhere,” she said. “They’re willing to assign a piece of their budget to a recruitment firm to help them get some of that key talent in the door.”

McMahon said retailers often seek Cannabis At Work’s help for key hires such as general managers, even if they’re not using the recruitment agency to fill all their positions.

One-time recruitment agency fees are typically structured as a percentage of the hire’s annual salary, McMahon explained. That typically includes a guarantee that the recruiter will replace the employee if they leave within a certain period of time.

Expect to spend between 10% and 20% of the target position’s annual salary for the recruitment fee, McMahon said—or even more for management or executive roles.

Kara Bradford, co-founder and CEO of Seattle-based cannabis recruitment and human-resources company Viridian Staffing, said she’s seen some other U.S. recruitment firms charge as much as 30% for a placement. For smaller stores, though, she said referrals and word of mouth are still effective strategies to get new hires on board.

Local media coverage—such as inviting a TV news crew to tour your store—can be another low-cost way for upcoming retailers to attract applicants. “In some areas, it’s really big news when a new cannabis store is opening,” she said.

Scott Wells, executive vice president of talent acquisition at multistate marijuana operator Cresco Labs, said the Chicago-based company doesn’t make a practice of poaching workers from competitors, citing “a little bit of an unspoken agreement that we’re not going to try to raid each other.”

“If we play nice in the communities that we work in, we think our competitors will do the same,” he said.

Of course, with a 50-person HR and recruitment team, Cresco’s hiring process looks different than a mom-and-pop retailer’s might.

Wells said Cresco relies on a variety of recruitment methods such as employee referrals, online postings, third-party recruitment agencies and job fairs to staff its stores and facilities.

He sees benefits to hiring a diverse range of retail workers, including those with a passion for cannabis, but said retail experience definitely matters.

“Compensation is always a really tough area, because you want to pay your employees enough to excite them and retain them,” Bradford said. “But you also want to make sure that you’re able to pay your bills.”

The typical method for setting a pay scale is to assess what other local retailers are paying. Some jurisdictions such as Colorado require job postings to list compensation ranges. But compensation data can be obtained from jobs websites such as Indeed and Glassdoor.

“Then, maybe go up a little bit to offer a premium, especially if you’re in a state or municipality that does not allow tips,” Bradford suggests.

But setting compensation isn’t a one-time exercise: Raises and promotions can help retain those hard-earned workers over time.

“I think that what makes a lot of sense is to structure a few steps within each role,” McMahon said.

For example, the hourly wage for a budtender could be increased over time to a maximum rate based on the number of hours worked and their performance. “I think giving employees some line of sight on how they can get raises is important,” she advised.

McMahon points out that raises and promotions can be challenging for smaller, independent retailers, since there aren’t always many positions above the basic front-line roles.

Still, Bradford said vertically integrated marijuana companies might be able to offer more room for growth, moving promoted retail workers over to another area of the business such as cultivation or manufacturing.

“It’s the front-line managers who are responsible for rating their employees and coming back with consideration for (salary) increases,” he explained. “Of course, our flat rates do change over time, just from a cost-of-living perspective. As cost of living goes up, so does the need for compensation for your employees.”

Bradford points out that some jurisdictions such as California actually prohibit criminal background checks until a conditional employment offer has been made.

That complication highlights the usefulness of a professional human-resources practitioner—or at least an outsourced HR service, she said. “From a best-practice standpoint, I would say most companies do background checks,” she said.

Making an offer of employment before conducting a criminal-background check can bring advantages, Bradford said. “Specifically in cannabis, there are a lot of people who, unfairly, have records of some sort or another because of cannabis,” she said.

“It’s better to make sure that you’re hiring them because they can perform those job duties, and then making them the offer and then doing the background check.”

Cresco Labs’ Wells said the company runs background checks in most states where it operates, but it doesn’t pass up the opportunity to hire someone with a record for nonviolent cannabis offenses.

“We look for folks who have had those negative experiences with the war on drugs, and we try to find a way to hire those folks,” he said.

Throughout the application and interview process, advised Viridian’s Bradford, it’s important to remember that even unhired applicants can become loyal customers.

“By having a great interview process and standardized hiring process in place, it could mean the difference between (getting and) keeping a customer … or them going down the street somewhere else because they had a bad interview experience with you.”

“Always remember to follow up with people. If you’re not going to hire somebody for whatever reason … you always have to let them know,” he said. “Word gets out very quickly if you don’t treat candidates with respect—you have to tell them no when it’s a no, and you have to tell them why.”

Wells also advises keeping social equity in mind throughout the hiring process, particularly in light of the harms caused by the war on drugs.

“As a cannabis company, if you’re not focused on diversity, equity and inclusion and providing the right culture for your organization and putting the right people in front of your customers and your patients who have diverse backgrounds, I think you’re doing yourself and the industry itself a disservice.”

Solomon Israel is a reporter for Marijuana Business Magazine and MJBizDaily. You can reach him at [email protected]