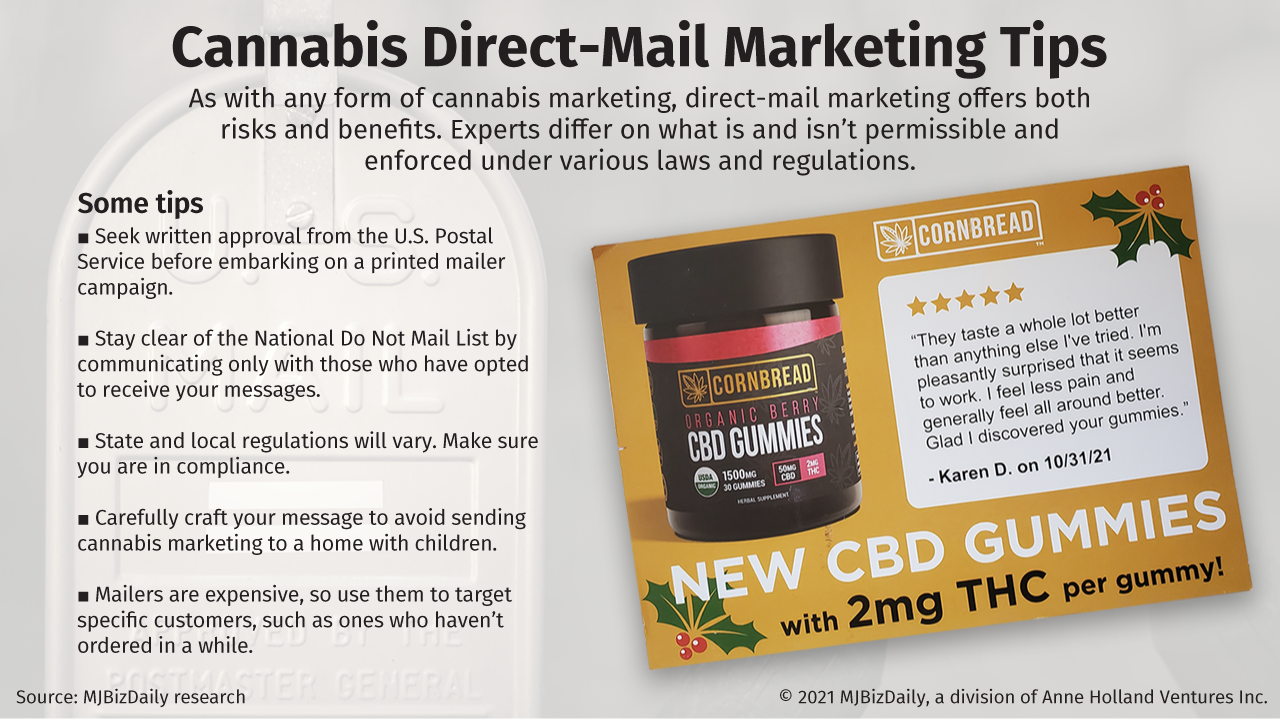 Kentucky-based Cornbread Hemp has included mailers in its marketing strategy for at least two years.

But a recent tweak to its messaging on a promotional postcard brought more attention than the company bargained for – so much so, it’s been flooded with orders and incited some worry among Cornbread Hemp’s customer base.

“We’ve been selling the exact same products for two-and-a half years,” co-founder and CEO Eric Zipperle explained on a recent video call alongside co-founder Jim Higdon.

That includes a bottle containing 1,500 milligrams of CBD and 0.3% THC, which isn’t a controlled substance.

Up until last fall, all marketing promotions included the percentage of THC per package. But company executives realized switching to milligrams – 2 milligrams of THC per 50-milligram serving of CBD in this case – would be clearer.

According to Zipperle, the reaction shows that, despite the growing acceptance of CBD and the increasing number of states legalizing medical and adult-use cannabis, THC is still very much a taboo subject to include on flyers or any marketing campaign.

And when it comes to mailer marketing through the U.S. Postal Service, direct-mail companies and marketers have different ways of interpreting and navigating the laws, and which ones are enforced in terms of hemp and marijuana businesses.

“Direct-mail marketing, like any type of cannabis marketing, comes with its risks and benefits,” advised Lisa Buffo, founder and CEO of the Cannabis Marketing Association.

According to David Coleman of the U.S. Postal Service, the rules are clear when it comes to marketing cannabis products in the mail.

“Under current federal law, it is unlawful to place any written advertisement in any newspaper, magazine, handbill or other publications, for the purpose of seeking or offering illegally to receive, buy, or distribute a Schedule 1 controlled substance, including marijuana,” he wrote in an emailed statement.

While the 2018 Farm Bill removed hemp from the Controlled Substances Act, marijuana is still a Schedule 1 drug.

That’s why Cornbread Hemp’s compliance team approved the company’s campaign, and why some direct mail companies like California’s Gunderson Direct will move ahead only with CBD mailer marketing.

That’s what his team did when coordinating a postcard mailout on behalf of Eaze Wellness, an online CBD-focused wellness company that is a unit of California delivery giant Eaze.

“That being said,” he wrote in an email, “there would have to be an actual sample of what they are intending on mailing before a ruling could be made on the content.”

The CMA’s Lisa Buffo also warned to be mindful of the National Do Not Mail list, which is offered by the Direct Marketing Association and allows consumers to refuse unwanted mail.

“It’s generally a best practice to communicate with those who have opted into your messages, like your current customers,” she wrote in an email. “There are also data privacy standards that you must comply with if using the USPS.”

While some companies are more comfortable with adhering to strict federal laws, others see state laws and local regulations as more important.

Guillermo Bravo at California-based cannabis advertising and digital marketing firm MediaJel said local regulations are the most important element to understand before moving ahead with a campaign. And many local jurisdictions are fine with both hemp and marijuana mailer advertising.

“We’ve launched them in California, Maryland, Michigan, Illinois, all over the place,” he said. “And each of them have different requirements.”

In California, for example, mailers must include a company’s sales license number. In some states, communications must be conducted in certain languages, while in other states, any incentives like discounts or buy-one-get-one-free aren’t permitted.

Like Gunderson, Bravo recommended printing out a sample of the flyer and showing it to in-house legal advisors and the local cannabis control board to get approval first.

He also said direct-mail marketers can precisely target the recipients very carefully and conservatively to avoid inadvertently sending cannabis marketing to a home with children.

And on the compliance side, it’s easy to show a list of the addresses and demographic information for each target — something that’s much trickier to do with other marketing formats, such as billboards.

“So when you’re actually choosing your audiences, you can select 25 and up with no kids living with them,” he said. “You can set that as a parameter so that you meet the requirements for the state.”

Eye on the ROI

While opinions differ on what is and isn’t permissible and enforced, everyone agrees that mailers aren’t the most effective as a top funnel strategy unless the budget is sizeable and they’re sent out in conjunction with several other formats, such as programmatic ad and broadcast advertising.

Cornbread’s Zipperle recommended mailers as a follow-up strategy to existing customers, when a consumer hasn’t made an order for some time and could use an incentive for follow-up purchases.

They’re also expensive, at about 80 cents per postcard, said Zipperle.

So be sure to include a promo code or QR code, depending on who you’re targeting. (Younger consumers tend to be comfortable with QR codes, while older consumers may prefer a promo code.) The codes help track the success of a campaign.

Cornbread’s Jim Higdon said the company will definitely use mailer marketing again in the future, and the mailers will continue turning heads with their THC-forward messaging.

“We see ourselves as a cannabis brand operating on the legal hemp side of the dividing wall that’s arbitrary and artificial and created by Congress,” he said.

“It’s still the plant, and the only difference is the THC level of that plant. And so we’re leaning into what THC we can offer, and we can offer that direct to consumer to 50 states and all U.S. territories. … That’s something that that no cannabis brand that’s locked in a state legal system can do.”