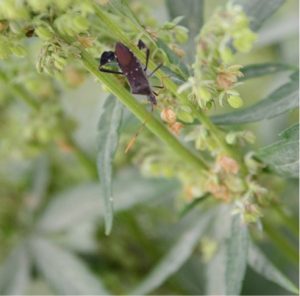 Accessing pesticides that can be used for hemp is one of the more challenging aspects of growing the crop – and that’s not likely to change soon.

As new hemp states across the country rolled out their cultivation programs in the spring, growers quickly found that there’s a scarcity of crop protection options, and uncertainty about whether the federal government is going to regulate hemp as a food additive or a drug is slowing the process for registering new pesticides that can be used on the long-prohibited crop.

Several agricultural chemical companies wait for guidance from the U.S. Food and Drug Administration, because its decision on whether to regulate CBD as a drug or food additive could determine what pesticides they pursue.

Meanwhile, one company has chosen to pursue pesticide labels only for hemp grown for fiber, not food uses, according to Ric Bessin, professor of entomology at the University of Kentucky.

The IR-4 Project, the primary organization in the U.S. that facilitates the registration of pesticides and biopesticides in food crops, is currently conducting two test trials for a herbicide and a fungicide for hemp, Bessin said. But getting a pesticide registered can take about 3 or 4 years, Bessin said during a recent conference about hemp production sponsored by the university.

Last year, the U.S. Environmental Protection Agency approved 10 pesticides for use on hemp, and the agency has reviewed additional applications over the past year.

Approving pesticides for hemp production was made possible by the legalization of the crop under the 2018 Farm Bill, which removed hemp and its derivatives from the Controlled Substances Act.

Most of the pesticides currently labeled for hemp are biopesticides listed with the Organic Materials Review Institute, meaning they can be used on organic crops. Biopesticides take less time to receive approval from the EPA than conventional, chemical pesticides.

So what can pesticides can growers use to protect their hemp crops? And what should growers consider before deciding whether to use a pesticide?  Bessin laid out four considerations growers should take into account: