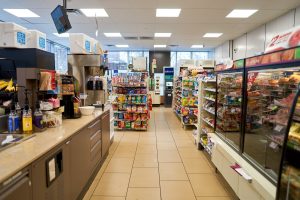 (This story has been updated from an earlier version to clarify that the announced deal was signed with a distributor, not 7-Eleven’s corporate offices. Read more about the deal and the confusion here.)

One of the nation’s best-known convenience store chains, 7-Eleven, could carry CBD products in up to 4,500 franchise locations across the United States by the end of 2018.

The Denver company made the 7-Eleven deal with the help of MarketHub Retail Services, a distributor that works with 7-Eleven franchisees.

“This agreement confirms our belief that CBD’s status as a mainstream wellness option has arrived,” Janet Rosendahl-Sweeney, founder of Phoenix Tears, said in a statement.

Here’s what you need to know:

Roughly 155,000 convenience stores operated in the United States in 2017 compared with only about 43,000 drugstores, according to the Virginia-based National Association of Convenience Stores.

Distributing CBD in 7-Eleven stores will “address the growing consumer demand for effective, safe CBD-based products that can now be easily sourced over the counter,” said Blake Patterson, president of MarketHub Retail Services.