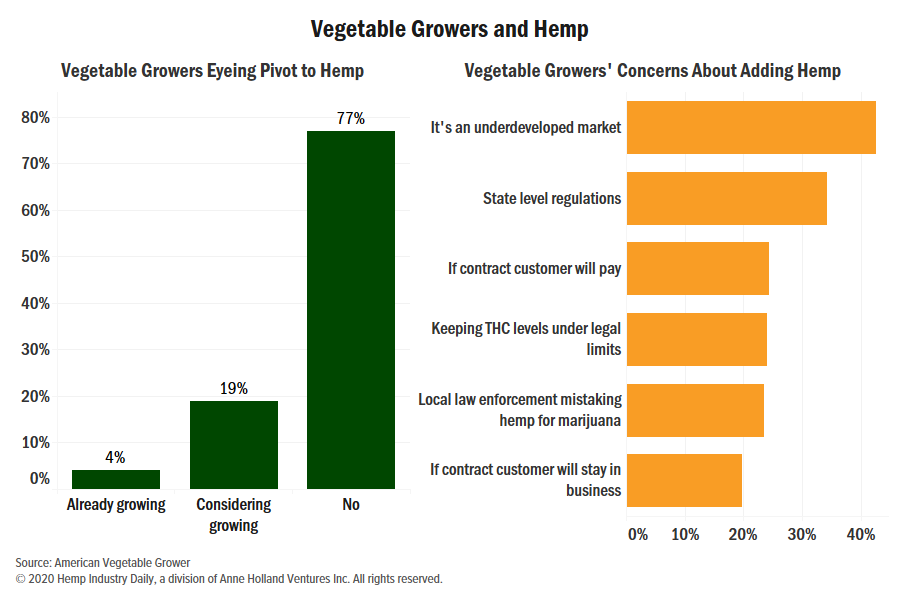 Vegetable growers across the U.S. weren’t among the traditional farmers heavily diversifying into hemp production in 2020.

According to a survey of 437 farmers by trade journal American Vegetable Grower, 77% said they had no intention of planting the crop this year. Just 4% of farmers said they planned to grow hemp while 19% indicated they were considering it.

However, the survey was conducted in March, just as the global coronavirus began shutting down the economy. It’s possible growers could have pivoted to alternative crops like hemp when vegetable sales dipped as restaurants and other large customers were closed, causing farmers to throw away much of their harvested crops.

Vegetable growers’ concerns were similar to other farmers who said they were holding off on growing hemp this year as they waited to see what happened in the nascent hemp industry, which suffered literal and figurative bottlenecks due to crop oversupply and continuously falling prices in 2019, a processor shortage and a lack of federal regulation for cannabidiol consumer products.

The largest concern among 43% of the vegetable survey respondents was that the market for hemp crops is underdeveloped, which is especially true compared to the well-established vegetable industry, which was showing positive revenue projections for the season, according to 28% of the surveyed growers.

Other top concerns included state-level regulations (34%), getting contracted customers to pay (24%), producing compliant crops within the federally legal THC limit (24%) and local law enforcement not being able to tell the difference between hemp and marijuana (23%).

Due to regulatory uncertainty, a vast oversupply in 2019 and the coronavirus pandemic, licensed hemp acreage decreased year-over-year for the first time since the 2014 Farm Bill established a national hemp pilot program.

Even with new hemp states online this year, the 2020 licensed acreage is down nearly 20% from 2019, which was more than quadruple the number of acres licensed over 2018.

Further, this year’s acreage reporting to the U.S. Department of Agriculture’s Farm Service Agency suggests that many hemp producers have not contributed to the annual Crop Acreage Report.

According to RJ Hopp, director of hemp markets for Denver-based commodity trading platform PanXchange, the latest federal report of approximately 62,000 planted acres of hemp is not only a significant deviation from last year, when 146,650 acres were counted, but also far lower than industry expectations for this season.