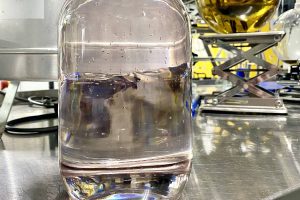 A rare cannabinoid that mimics the effects of delta-9 THC but can easily be produced from CBD is grabbing headlines and delivering impressive profits to extractors battling slumping prices for other hemp extracts.

But the popularity of delta-8 THC is bringing out sharp divides in the cannabis industry, on both the hemp and marijuana sides.

Some say delta-8 offers a nice alternative for consumers seeking an intoxicating buzz but not the debilitation and anxiety that can result from some highly potent THC products.

(Delta-8 is an isomer of delta-9 THC and appears to bind less readily to cannabinoid receptors, resulting in milder effects.)

But others warn that delta-8 is simply a knockoff of the real thing promoted by unscrupulous extractors looking to offload surplus CBD and sell intoxicating products in jurisdictions without legal access to delta-9 THC.

And some fear that delta-8’s popularity threatens to undermine the entire hemp industry by alarming the politicians who approved hemp and its extracts without realizing some of those extracts could get folks high simply by following instructions widely available on YouTube.

It’s a situation that has cannabis entrepreneurs debating whether to join the delta-8 bandwagon while it’s hot or stick to more common cannabinoids where the legal status is better understood.

‘It just started to take off’

Longtime hemp extractors concede that the delta-8 trend caught them off guard. The isomer was long understood as a weaker variant of the form of THC everyone is familiar with.

So James Hurlston, CEO of Ratoon Agroprocessing in Marion, North Carolina, was surprised at the response he got last year to a social media post saying his lab had created delta-8 from a batch of CBD isolate.

“I just kinda put it out there—’Hey, we made it some delta-8. Is anybody else doing this?’ And the response, oh my gosh! It just started to take off.”

Also taken by surprise was Harold Jarboe, owner of Tennessee Homegrown, which grows hemp and makes CBD. He started making delta-8 from his CBD isolate last year in response to customer demand. Now, his delta-8 is cannibalizing his CBD sales.

“It’s the cannabinoid for its time,” he said of delta-8 THC.

”We’ve heard this for years from our customers: ’Do you got anything stronger?’ And (delta-8) wasn’t real, real strong, but it was a little stronger, something that took the edge off the day a little bit.”

Jarboe then started selling delta-8 products even to customers with legal access to conventional THC products.

Customer response to delta-8 isn’t the only reason CBD manufacturers are so excited about it. The cannabinoid’s wholesale value makes it almost impossible to resist.

Delta-8 wholesale prices range from $1,500 to $2,000 a kilogram, depending on volume and quality, several extractors told Hemp Industry Daily. Prices were even higher last year.

That compares to CBD isolate wholesale prices that have dropped to $600 per kilogram or lower because of abundant supply.

Another appeal: the cannabinoid’s legal ambiguity makes it attractive for testing sales in new markets and in outlets still off-limits to traditional THC makers, such as convenience stores.

Of course, legal opinions vary on whether delta-8 THC is legal if it comes from a hemp extract.

Some say that because hemp and all its derivatives are legal, delta-8 THC is in the clear.

Others point to a rule from the U.S. Drug Enforcement Administration about THC levels in hemp processing that would appear to make delta-8 THC an illegal synthetic version of its better-known cousin, delta-9 THC.

At least one retailer, a smoke-shop operator in south Texas, has been charged with drug crimes for selling delta-8 THC products that came from hemp. (The case has not been resolved, and the DEA rule is under legal challenge by the Hemp Industries Association.)

To Garrett Graff, attorney with Hoban Law Group in Denver, the landscape looks a lot like the legal thicket CBD faced in its early days.

That’s because local law enforcement is being left to sort out some mixed messages in federal law, resulting in spotty enforcement.

“It’s a complicated question,” he said of delta-8 legality. “There’s a potential conflict of law that hasn’t yet been resolved by a court.”

The legal questions have some in the cannabis industry saying that delta-8’s clock is ticking.

Sean Santa, an investment banker in Bethesda, Maryland, who helps cannabis companies raise capital, said that delta-8 products are too often jostling for consumers who would prefer delta-9 THC if they could get it.

“I believe it it’s a fad,” Santa said of delta-8 products.

“Right now it has this niche because of the legal gray area. But when that goes away, I think (delta-8) will be completely wiped out.”

That legal gray area is sparking conversation in Congress and in statehouses about putting unwelcome limits on how hemp can be used, said Jonathan Miller, lawyer for the industry activist group U.S. Hemp Roundtable.

“Basically they’re afraid that the 2018 Farm Bill somehow opened up a loophole for unregulated intoxicating products,” he said.

“And we’ve been talking to a lot of folks in the marijuana industry. And they’re upset that there are competitive products being sold in gas stations without regulation, while they’ve got to go through dispensaries and abide by some very strict regulations.”

Miller predicts a raft of delta-8 THC limits being proposed even in adult-use marijuana states.

“Anything intoxicating should be treated like adult-use cannabis,” Miller said. “It should not be readily available unregulated at gas stations and vape shops.”

Delta-8 manufacturers say the product will find a place in the larger cannabis economy no matter how it is regulated.

“I don’t like delta-9; I don’t like the anxiety,” said Craig Henderson, CEO of Extract Labs in Boulder, Colorado.

“But I do like relief of inflammation. I do like sleeping better. I do like having a slight mood change, maybe feeling a little better during the day. And there’s a lot of people like me.”