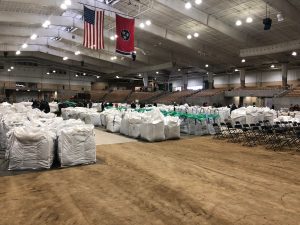 Many farmers sold hemp biomass for under the set floor price of $1 per CBD point during the International Hemp Auction and Market in Franklin, Tennessee, in late November. (Photo courtesy of Casey Flippo)

Optimism around a three-day hemp auction in Tennessee turned to disappointment when producers found way more sellers than buyers, driving prices down and leaving some frustrated.

But organizers of the inaugural International Hemp Auction and Market, modeled after tobacco auctions in the area, say the market volatility will settle down, making future auctions more valuable.

The oversupply in November was too much for farmers such as Ryan Rowlett, a hemp grower from Greeneville, Tennessee, who returned home from the auction in Franklin with the 2,500 pounds of CBD biomass he’d taken to sell.

“There were too few buyers and too much biomass,” Rowlett said. “I was hoping there would be enough buyers to compete and drive up the price.”

The auction drew hundreds of farmers from around the country with thousands of pounds of biomass, hemp flower and CBD oil, and roughly 70 registered buyers attended.

“If you have 1,000 buyers on the Chicago Board of Trade, but the commodity is not selling for more than $2.67 a pound, you’re not going to have more money,” said Case, who is also a hemp farmer and processor.

“Once you meet a point in the market, the number of buyers doesn’t make a difference.”

Case, who declined to share final sales figures, acknowledged the auction timing could have been better for farmers, considering dropping prices for biomass and hemp flower.

“The objective was that transparent playing field, and that did happen – it’s just unfortunate it was when the market price was poor, because of the appearance of oversupply,” he said.

Problems started on the first day of the sale, when 160,000 pounds of biomass, representative samples of what farmers still had to sell back at home, were tested and readied for bidding.

Casey Flippo, CEO and co-founder of Little Rock, Arkansas-based extractor firm Natvana, told Hemp Industry Daily he knew there was trouble when he arrived in Franklin and 75% of the biomass had been through the auction but nothing had been sold. The bids were coming in too low.

“They literally stopped, sent the buyers to the back and asked to let them adjust a little bit, and that’s how we proceeded from there,” Flippo said.

Case paused the auction to talk with both buyers and sellers about why the crops weren’t selling.

In contracts for auction participants, floor prices had been set at:

“Now, that’s a low price. But a month earlier, people were paying less than $1 (per point for biomass) in Oregon, so I was thinking surely we’d get at least that and hopefully $1.50-$2.50 a pound,” Case said.

According to the November hemp report from PanXchange, an online trading platform based in Denver, biomass sold for $0.80 to $1.40 per CBD percentage point, down from $1.61 to $2.71 per point in October.

The end prices went below the floor. Case said that many farmers told him they just wanted to unload their hemp and chose to sell under the baseline prices.

“The general consensus was that there were people that wanted to get out of the market and they wanted to sell under the support price,” Case said.

According to Case, the final prices were:

Hemp flower was sold on the second day of the auction and went better, according to Flippo. Case reopened bidding for biomass on the last day to give farmers another opportunity to sell their crops.

“It’s very hard to come up with new ideas and bring it to fruition and not have hiccups,” Flippo said.

Although Rowlett didn’t sell his biomass or flower at the auction, he said he made some valuable contacts.

“I didn’t think the auction would be the end-all, be-all solution, but it helped facilitate a lot of things,” Rowlett said.

Prices could have been better, Flippo said, but he told Hemp Industry Daily he suspects many of the buyers were there to see how good of a deal they could get.

With the current patchwork regulation in states across the U.S., some buyers who planned to take their hemp back to hemp states that measure total THC couldn’t bid on some lots, Case said.

Because Tennessee currently measures only delta-9 THC instead of total THC, the levels were fine for in-state buyers and other adjacent states testing for delta-9 only.

“I don’t like to be quite so frank with farmers because I’m a farmer, so I understand their pain,” he said. “But I’m a processor as well, so I understand the difficulties (with poor quality crops), and we were very honest and forthright” about quality.

The first attempt at an auction in the hemp industry had some speed bumps, Case admits.

He said his staff is working to correct the issues with logistics, procedures, pricing and fees by forming an advisory board of hemp industry members and relaunch a series of regional auctions starting in the spring.

No dates or locations are set yet, but the invitations have been rolling in from North Carolina, Oregon and Texas, Case said.

Another company sponsored a hemp auction on Dec. 7 in New York City.