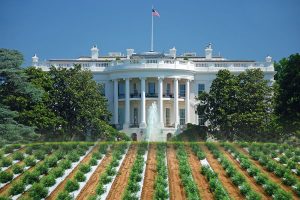 The hemp industry has high hopes for thriving under President Joe Biden, with operators seeing opportunities in the president’s climate plan and feeling optimistic that congressional action on high-THC cannabis will open more opportunities for hemp entrepreneurs.

But the industry is still waiting for answers on some of its most pressing concerns, especially the legality of over-the-counter CBD products.

Hemp producers and manufacturers also have big questions about how the administration will interpret new rules around farming hemp and extracting cannabinoids.

Biden’s plans to tackle climate change may be the brightest point of optimism for the hemp industry.

Just a week after taking office, Biden laid out a climate agenda that includes:

The agenda doesn’t mention hemp. But hemp advocates say the plans could be a windfall for hemp, which sequesters carbon and can contribute to more energy-efficient buildings.

“2021 can be the year of hemp,” said Geoff Whaling, chairman of the National Hemp Association.

With government dollars creating a financial incentive, though, hemp’s environmental aspects could attract interest beyond the flower.

“The ability to harness hemp’s power to sequester carbon from the atmosphere and remediate toxins from the soil could finally become a functioning reality instead of a theoretical possibility,” Texas cannabis attorney Lisa Pittman told Hemp Industry Daily in an email.

“Similarly, the possibility of utilizing captured carbons for credits for use by the oil and gas industry may become an attractive necessity rather than merely an interesting idea. There are many ways to capture those carbons, so the (research and development) in this realm will be exciting.

“These changed circumstances may break open the door for the industrial uses for hemp that to date have been stymied by lack of investment, institutional interest and infrastructure.”

Perhaps the biggest question mark facing the hemp industry in the Biden administration is how the FDA will approach the industry.

The agency has been reviewing CBD policy since 2019 but maintains that any cannabis extracts can’t be sold outside pharmaceutical channels.

The interpretation is broadly ignored, though the Trump-era FDA issued dozens of warning letters to CBD manufacturers making medical claims about the product.

The result has been a mish-mash of state-level CBD regulations about how the extract can be used in foods, drinks and dietary supplements. It’s a confusing patchwork that has hindered national expansion plans for many CBD makers.

“We’d like to see regulatory certainty. We want to enter every single state,” said David Culver, vice president of global government relations for Canopy Growth Corp., an Ontario-based cannabis company with hemp-derived CBD brands in the United States, including the Martha Stewart line of CBD edibles and pet products.

It’s not clear when that certainty might be coming, though.

A day after Biden was inaugurated, the FDA withdrew a proposed CBD enforcement plan that had been pending at the White House for months. The agency has given no indication when the CBD industry might see a new plan from the FDA.

Biden has yet to nominate a permanent commissioner to oversee the agency that right now is focused on overseeing the delivery of Covid-19 vaccines.

Biden’s acting FDA commissioner, Dr. Janet Woodcock, has said nothing publicly about CBD or how it should be regulated.

The lingering questions about FDA’s CBD policy has some looking to Congress to act first, perhaps by passing a bill to circumvent FDA and legalize CBD in dietary supplements.

No such bill has yet been proposed in this Congress, though many expect to see a new version of an unsuccessful bill from last year to clear a path for over-the-counter CBD with a nationwide set of safety standards.

“It is incumbent upon Congress to amend existing law to permit certain CBD ingestible products, presuming such products comply with sensible labeling and safety standards,” Jonathan Havens, an attorney who follows FDA policy closely, wrote recently in a column.

Another agency of major interest to the hemp industry is the U.S. Department of Agriculture, which governs how the crop can be grown.

The USDA published its final hemp rule just hours before Trump left office. That means the agency hasn’t had to withdraw a proposal – but it also means that the 11th-hour rules are likely due for another review after two years of work.

Hemp farmers who take issue with the USDA’s stance on sampling and testing hemp plants are hoping to see USDA take yet another look at the protocols.

Biden’s choice to lead the USDA, Tom Vilsack, was Agriculture Secretary through implementation of the 2014 Farm Bill, which allowed states to experiment with hemp.

Vilsack was approved by the Senate Agriculture Committee Tuesday in a virtual confirmation hearing. He now awaits a vote by the full Senate before taking the reins at USDA.

Marijuana reform on the horizon?

Hemp operators are also watching to see if Congress takes any steps to expand access to high-THC cannabis.

The Democratic House last year took the landmark step of removing all cannabis from the Controlled Substances Act, not just low-THC hemp.

The proposal failed to get a hearing in the Senate, but marijuana activists are hopeful that the current Senate will be friendlier (new Vice President Kamala Harris was a prime sponsor of that bill).

“There’s no question that the political dynamic we have right now is going to lead to some significant changes in cannabis policy,” Culver said.

Even more modest marijuana-related changes, such as measures to improve banking access for marijuana businesses in legal states, could have a positive impact on hemp operators, said Jody McGinness, executive director of the Hemp Industries Association.

“Hemp businesses are being treated as if they were high-THC cannabis businesses,” McGinness said.

“As long as cannabis is illegal in the United States, there are going to large (banking) institutions that are going to be hesitant to get into this space.”

Prudent hemp operators should be planning now for how they’ll compete if the cannabis-wide industry sees hoped-for reforms in the next four years, Pittman said.

“It is quite possible that the heightened popularity of hemp-CBD and other hemp cannabinoids will wane in favor of whole-plant full THC options, and, by then, extraction techniques and CBD:THC ratios will be even more advanced,” Pittman said.

“Therefore, hemp players in the supplement space should plan for how they are going to compete in a future consumable hemp products market that the FDA regulates, and that also competes with widely available legalized cannabis.”