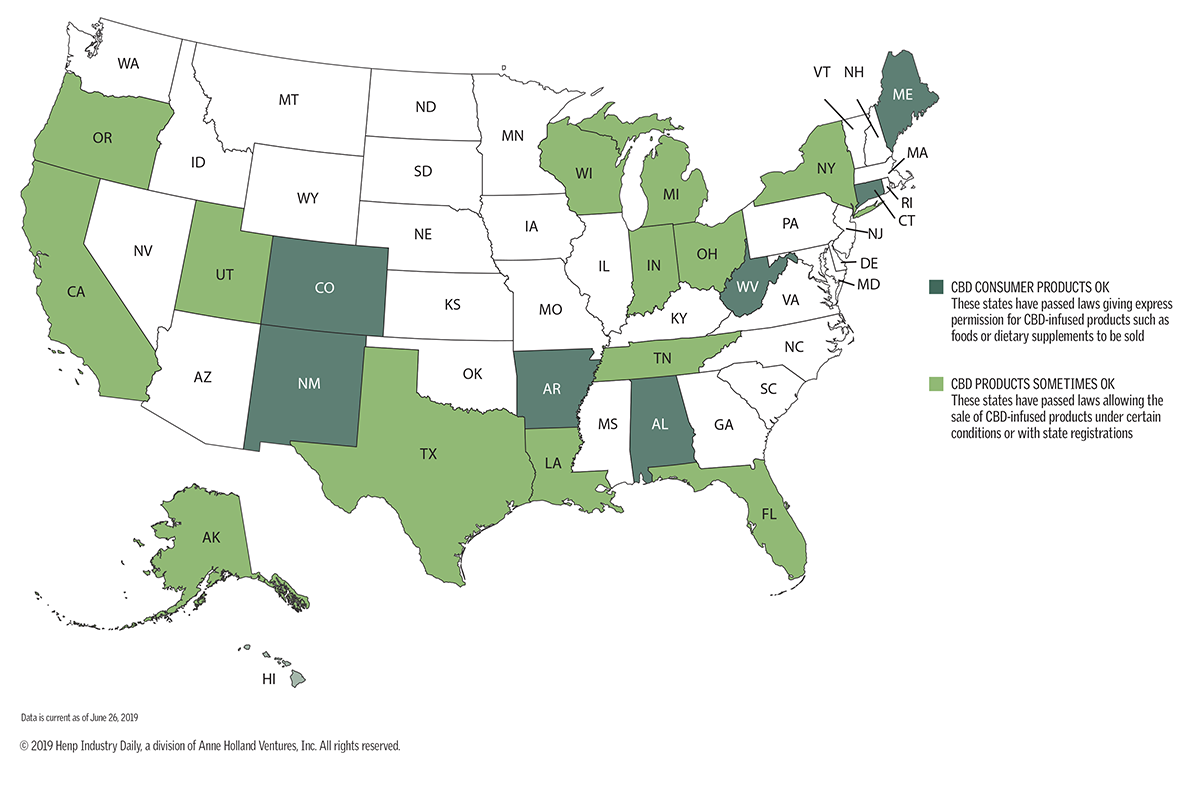 (This story has been updated to clarify that the U.S Hemp Roundtable objects to protectionist language in a New York CBD bill but not country-of-origin labels specifically.)

Hoping to resolve the legal confusion surrounding the selling of CBD products, states are starting to leapfrog federal health regulators and give hemp entrepreneurs permission to put cannabis extracts in food, drinks and dietary supplements.

But the efforts aren’t reducing legal headaches for the hemp industry.

That’s because states and even local governments are crafting their own health-and-safety regulations, giving product manufacturers and retailers a dizzying array of laws to consider before selling their products across state lines.

It’s a paradoxical consequence of hemp legalization through last year’s Farm Bill. As more farmers seek to grow hemp, and mainstream retailers and restaurants feel more comfortable carrying CBD products, states are trying to give the industry legal assurances that these products won’t be seized as illegal contraband.

“People are hopeful and excited, and they want to think, ‘Great! We can do it now,’” said Anita Sabine, a Los Angeles-based cannabis attorney. “But it’s really not a one-size-fits-all approach. There is no such thing as a 50-state rollout.”

The accompanying map shows the wide variety of state approaches on CBD. Some states have ignored the CBD sales trend, leaving enforcement up to local agencies that are trying to make sense of U.S. Food and Drug Administration (FDA) guidelines.

Others are giving CBD the thumbs-up, but not through law. Still others are writing their own rules for ensuring that CBD products are safe.

Those are just samples of the disparate rules being considered by states trying to find ways to make sure CBD products are safe while the FDA begins work giving the industry national oversight.

(The FDA has repeatedly said that CBD can’t go in food or dietary supplements sold across state lines. However, the FDA’s light enforcement of that rule, combined with its statements that regulators are willing to consider over-the-counter CBD sales, has led to broad market activity in CBD sales with only sporadic product seizures or penalties for selling unapproved products.)

For hemp entrepreneurs, the patchwork of state CBD rules is dashing hopes the Farm Bill solved the problem of allowing interstate commerce.

Though the Farm Bill guaranteed states can’t interfere with hemp sales, the law also reiterated the FDA’s authority over putting hemp products in food and drugs sold across state lines.

Hemp entrepreneurs say the CBD landscape is getting more complicated, not less.

“What we see is a lack of serious investment (in hemp) because people don’t know where the industry is headed,” Kaelan Castetter, CEO of CSG Hemp in Binghamton, New York, told Hemp Industry Daily.

“If you’re going to invest in the development of a product, you don’t want to hear that the FDA could step in and change everything,” Castetter said.

And the state efforts are in some cases making it harder to sell CBD even locally. That’s the case in states such as Georgia and Massachusetts, where agricultural regulators have said CBD can’t go in food or drinks.

“There are a lot of retailers who are pulling products off shelves, telling people they can’t carry them anymore,” said Julia Agron, who owns a small hemp farm in Amherst, Massachusetts. “We have consumers freaking out because products they rely on are no longer available to them.”

Many more states allow hemp production but don’t specify how hemp extracts can be sold, leaving CBD sellers subject to confusing enforcement by local health agencies unsure how to interpret the FDA’s guidance on cannabinoid products.

Until the FDA settles on a national CBD regime, hemp businesses have no choice but to accept some risk when taking products to market, said Whitt Steineker, a lawyer in Birmingham, Alabama, who advises cannabis companies.

“At the end of the day, the FDA runs the show,” he said. “Until we know where the FDA lands on this, you’re making a risk calculation for your business.

The good news for CBD operators is that states are at least trying to give them a legal path to market – though compliance with all the rules can be daunting.

Advised Sabine: “If you want to be a good operator and you want to mitigate against any liability, you’re going to have to be extremely methodical.

“The level of corporate compliance is high. Internally, you need be to be prepared for that and set up systems to deal with it.”

Trying to get it right

Hemp producers say they’re glad to see states giving them even limited guidance on how to safely make CBD products – even if their companies are playing guesswork about how to comply with a patchwork of rules.

One of those entrepreneurs is Christie Tarleton, who grows hemp outside Nashville, Tennessee, and makes CBD tinctures and topicals sold in several states.

Her state requires CBD products to be made in certified facilities, which her company, Yuyo Botanics, does. But she must also adapt her labels for sale in other states.

“It’s a little bit of a frustrating thing because I don’t think anyone has solidified what needs to be on a label,” Tarleton said.

Even the hemp industry itself isn’t always on the same page about CBD safety standards. Multiple attempts to establish voluntary industry guidelines to forestall federal recommendations are still unsettled.

The U.S. Hemp Roundtable, for example, disagreed with New York hemp producers about requiring that hemp products including CBD beverages sold in the state must be produced there.

“We’re trying to get in front of the FDA and regulate intrastate commerce so we can protect small manufacturers and farmers and prevent big pharmaceutical companies from controlling the market,” Castetter said.