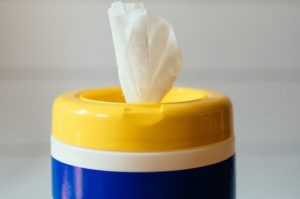 Paper manufacturer Georgia-Pacific and a Canadian company that makes natural nonwoven fibers formed a partnership in February – born from a mutual interest in hemp – that could add those items to store shelves.

Looking for alternatives to single-use nonwoven products, the companies saw they could team up to achieve that goal: Atlanta-based Georgia-Pacific, which makes Brawny paper towels and Quilted Northern toilet paper, has patents for a variety of bast fiber products; Victoria, British Columbia-based Bast Fibre Technologies, meanwhile, has a wealth of experience working with bast fiber.

On Feb. 25, the companies announced a global licensing agreement that would allow BFT to produce products under Georgia-Pacific’s patents.

Bast fiber comes from the inner bark of the bast family group of plants, including hemp, flax, jute and kenaf. Nonwoven materials are made with fibers that are bonded with chemicals, solvents or heat.

So how did this blockbuster deal come about and what’s the strategy going forward? Noel Hall, the CEO of Bast Fibre Technologies, spoke with Hemp Industry Daily recently to talk about the agreement.

We have been discussing this idea with G-P for probably six to nine months. We were aware that they had developed some interesting intellectual property in the bast-fiber space.

I knew their focus was in the U.S. market, primarily under the industrial sector, and yet these patents had a much broader role.

How did the deal come about?

We broached the subject of G-P collaborating with us, and they fully embraced it. This was a way for them, frankly, to maximize the value of their intellectual property. And I think they recognized our skill in procuring the best-quality in hemp fiber from around the world.

The nonwoven industry is in the spotlight right now because that’s the industry that’s producing personal protective equipment for all frontline healthcare workers.

The N95 mask would be considered a nonwoven product. But nonwoven products cover a vast gamut of applications – from cleaning wipes all the way through to sanitary products, makeup removers, and cosmetic face masks. It’s a huge industry.

And the vast majority of the fiber that is used as the raw base material is synthetic fiber. So you’re talking about fiber that is derived from petroleum-based sources.

How hemp can improve upon nonwoven products?

The reason we like hemp in the nonwoven industry isn’t just about the sustainability story. It’s fundamentally about the performance attributes of hemp fiber when it becomes part of a nonwoven fabric, because the fiber itself is naturally absorbent.

You’ve got a kitchen spill and if you actually have a cleaning wipe that has got a lot of high fiber percentage in it, it’s going to prove to be more absorbent than a synthetic wipe.

What is size of the nonwoven industry globally?

It’s approximately a $60 billion industry. Then you basically split that market down into what they call the disposable and the durable market.

Then that remaining 20%, I would say the vast majority of that would be what they call manmade cellulosic fiber. So that would be fiber that is from wood pulp, primarily.

What are some of the products you plan to make?

COVID has dramatically increased the number of cleaning wipes people are using. We’re seeing a lot more disposable cleaning wipes being used in all sorts of facilities. Now everyone is saying that this demand change will be permanent, that this is sort of a step change in demand for nonwoven cleaning wipes, and today the vast majority of them are synthetic.

That is really the opportunity for hemp fiber to come in and be, I think, a more natural, better-performing fiber that is also fully compliant with all of the environmental legislation that’s being introduced, not just in Europe but in China, Canada, the States, (where) it’s been done at the state level now.

When do you expect to have products on the shelves and what kind of products will be the first?

We have been delayed as a result of COVID, just with some of the trials that we were doing with our customers. We will be on the market with our nonwoven hemp fiber in a variety of applications by the end of this year.

Cleaning wipes is an obvious one for us. And the reason we would go into that market initially is that that’s where the absorbency characteristics and the performance characteristics of the wipe containing the hemp fiber is a perfect application.

We’re also looking into developing a flushable wipe and we were planning to probably get that into the market by the end of this year or early next year.