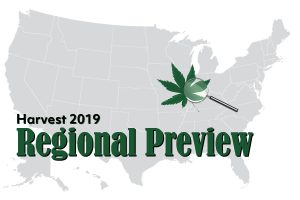 (Editor’s Note: This is the first of an occasional series of regional reports looking at the 2019 hemp production season leading up to harvest.)

The 2019 hemp production season has been much like what many describe the hemp and CBD industry: the Wild West.

In the absence of federal hemp production guidelines, hemp farmers were directed to grow the crop under the varying state rules under the 2014 Farm Bill hemp pilot research program.

With limited data and guidance available about modern hemp production from seed to sale, producers have been largely left to their own instincts. But some hemp farmers found help from more experienced fellow farmers, consultants and some university extension specialists with hemp backgrounds.

Hemp Industry Daily caught up with Marguerite Bolt, hemp specialist with Purdue (University) Extension in its Department of Agronomy, to find out how Midwestern farmers in her state fared with the 2019 production season.

According to the Office of Indiana State Chemist, Indiana licensed 130 farmers this year, with roughly 5,300 acres for outdoor production and approximately 400,000 square feet of indoor production.

Indiana made national news this week when a federal judge threw out the state’s ban on smokable hemp, saying it was unconstitutional.

Bolt said more than half of Indiana farmers planted fiber varieties in 2019, with 35% focused on growing hemp flower for CBD production and 15% planting hemp for grain.

Here is the rest of Bolt’s season summary:

June also brought below-normal temperatures; across the state they were 1°F-3°F below normal.

In July, areas of central and northern Indiana had drought conditions. There was increased rainfall and humidity in some areas of the state during August.

In September, above normal precipitation is predicted.

Wet weather in May and June delayed planting of hemp in most regions of Indiana.

Specifically, some fields intended for CBD hemp did not get planted until the middle or end of July.

Delayed planting was common for grain and fiber growers, too.

Leaf spots, southern blight, white mold and gray mold (were) mostly observed with the increased humidity and rainfall in mid-August.

Flea beetles from May to July were a big complaint, with some corn earworm mid-July into August.

Eurasian hemp borer was found in a northern county of Indiana, but there is not any apparent yield loss at this time; borers were found at the end of August.

Farmers are also observing some fall webworm damage in the hemp.

Indiana does not have a list of allowable pesticides, so growers should not have applied anything.

Some indoor growers have released parasitic wasps for control of cannabis aphid; some have also used predatory mites for the control of spider mites.

Some growers applied fertilizer and incorporated it in the soil preplant, while others did sidedress applications and used fertigation.

More data will come from the mandatory field summary reports at the end of the year.

The reports growers submit at the end of the year should give a better estimate (on percentage used of seeds versus clones).

This is the first-year growers are doing CBD production, so they do not know which varieties will work best for their farms.

Grain and fiber producers did not have much of a choice. They also likely would not have a preference because it is the first year of larger scale production in Indiana.

Germination rate was 50%-90%; this was extremely variable.

Fiber plants should have been harvested in August, and most have been.

Grain harvest is expected by the end of September, possibly into October.

CBD harvest of autoflowers is underway or complete. CBD harvest for photoperiod-dependent (varieties) is underway for some; others expect to harvest all the way into mid-October or until a hard freeze.

All the fiber and grain growers are using equipment.

CBD growers are mostly using labor with pruners or Weed Eaters to harvest the plants. A few growers will use machinery, but I have not seen this yet.

All growers were supposed to have a buy-back agreement or contract.

(This interview was edited for clarity and length.)