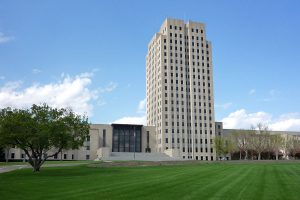 A tobacco-shop owner appealing his drug conviction said the products he sold were perfectly legal, but prosecutors want North Dakota’s highest court to leave that question to a jury.

The North Dakota Supreme Court heard arguments this week in the case of Falesteni A. Abu Hamda, who was charged in 2017 with seven drug crimes after police seized CBD vape pens and gummy bears from two of his Tobacco Depot shops.

Hamda’s appeal has attracted national attention because it asks a court to review whether authorities can rely on 2016 guidance from the U.S. Drug Enforcement Administration to charge someone with a drug crime for selling CBD.

That guidance does not apply to CBD derived from legal hemp.

“This is a case that has a profound effect across our state, across our country,” Hamda’s attorney, Deanna Longtin, argued Monday.

Longtin said that Hamda had no choice but to accept a plea deal, even though North Dakota could not show his CBD was illegal.

But the prosecutor in the case, Charles Neff, asked the five-judge panel to avoid taking a position.

“We’re not looking for a blanket (decision), is CBD legal or illegal?” Neff said. “The jury themselves can make that determination.”

Neff asked the judges to focus instead on the terms of Hamda’s plea deal, arguing that Hamda could have taken his argument to a jury but chose not to.

“Your argument is that because (prosecutors) can’t prove where it came from, that it’s not illegal?” she asked.

“Wouldn’t that be your burden to show where it was derived from? Wouldn’t you have to prove where it came from?”

Longtin replied: “I would argue that that burden is on the state.”

North Dakota’s decision won’t set a legal precedent in other states, but it may provide guidance for similar cases.

The court has no deadline to announce a decision.