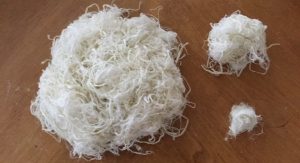 The U.S. hemp textiles supply chain has to start somewhere, so it might as well begin with T-shirts, according to one North Carolina-based apparel manufacturer.

Developing a domestic hemp fiber supply chain in the U.S. could help create a transparent, sustainable, profitable industry that will pay farmers a living wage for their crops while avoiding humanitarian crises internationally.

That’s the goal for a new project that was launched during a virtual hemp industry event in late February by Eric Henry, president of Burlington, North Carolina-based clothing manufacturer T.S. Designs.

Henry said that in a post-coronavirus economy, the hemp industry and the domestic textiles supply chain have become aware of the shortcomings created by the outsourcing of everyday goods.

That’s why it’s time to re-imagine and rebuild the fiber supply chain domestically and create a more resilient community, he said.

“We have an opportunity post-COVID to build a new supply chain for textiles, and I think hemp can be a critical component of that.

“But (in) commodity ag, the farmer has zero say in what they get paid – so I want to bring a new supply chain that brings the farmer to the table,” Henry said at the Industrial Hemp Summit virtual event.

According to projections from Hemp Industry Daily’s 2021 Hemp and CBD Factbook, the hemp fiber market –a broad category that includes textiles as well as bast fibers and hurd products such as bioplastics, animal bedding and hempcrete – will grow from $209 million in 2020 to $482 million in 2025, a compound annual growth rate of 18%.

Some industry insiders expect the domestic hemp fiber and apparel market to develop into a multibilllion-dollar industry.

Currently, hemp fiber for American-made apparel is largely imported, with imports more than doubling from $131,644 in 2018 to $330,252 in 2019, according to the U.S. Department of Commerce’s Office of Textiles and Apparel.

Taking hemp from seed to shelf

T.S. Designs’ Project 2021 is the culmination of a yearslong effort to manufacture clothing made with U.S.-grown hemp “from dirt to shirt” – one of the first hemp projects of its kind.

The effort will yield exactly 2,021 T-shirts – a blend of 80% North Carolina-grown cotton and 20% Kentucky-grown hemp in 2021 and made in the Carolinas.

“That’s not that many, but we just wanted to show a finished product, so we literally created the bar as low as possible, so we could get something across the finish line that is a quality product and we know the farm it came from,” Henry told Hemp Industry Daily.

Blending hemp with cotton will allow T.S. Designs and its partners to make the T-shirts on the machines already available.

The hemp/cotton blend, according to the Project 2021 website, will provide more durability while offering “a new natural fabric (that) will be an antidote to pervasive and increasing use of polyester in the apparel industry.”

If T.S. Designs can show success with Project 2021, then it can start adding zeros to the first 2,021 T-shirts, Henry said.

The project is the beginning of what he says will be a new opportunity in the fiber marketplace – once it proves to be both economical and sustainable.

“We’ve got to get something in somebody’s hand and say it can be done: grown, processed and manufactured here in the U.S.,” Henry said.

Global trade agreements in recent decades have accelerated a business climate in which manufacturers “got tunnel vision, seeing only dollar signs” and recognized the chance to make their products cheaper outside the U.S., beginning the “race to the bottom” on prices, Henry said.

As a result, many textile mills have closed, their workers displaced and the farmers that supplied them bankrupt.

Making matters worse, farm policy and trade wars over the past three decades have driven down commodity prices, causing record farm bankruptcies in 2018.

Henry said he has been interested in adding hemp fiber to his shirts for a decade, but it hadn’t been possible because growers weren’t allowed to produce it commercially until 2018.

And, after that, the supply chain wasn’t in place because most growers were focused on growing hemp for CBD.

He also wants to set up a similar system for hemp farmers.

Though China and other countries have supplied textiles to the U.S. for decades, COVID-19 showed the world how fragile a global supply chain is when it’s chasing cheap labor, Henry said.

“That supply chain got rocked this past year, and that’s why we are super busy with people who we’ve never had conversations with before. …

“But now they realize this idea of domestically making (apparel) in a local supply chain is a heck of a lot more resilient than running around, trying to find another nickel (of) savings from unsustainable cheap labor.”

Through his work on Project 21, Henry said he plans to share information as an open source, to provide other manufacturers with resources on sourcing hemp domestically and blending it with other natural fibers.

He hopes American consumers become more conscientious of their purchases and their social and environmental impact.

“The better perspective we can have, beyond just the conversation of price, benefits everybody and helps us be more resilient in the future when we have another global disruption.”