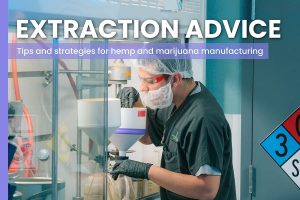 (This is the 10th in an ongoing series offering tips and advice for hemp and marijuana extraction companies. The ninth installment is available here.)

Solventless cannabis extraction is going commercial, with an array of new technology expanding the niche sector beyond small-batch artisans.

Solventless extracts refer to concentrates that use heat, pressure, ice or water to extract cannabinoids, leaving terpenes intact and no trace of chemical residue.

Long beloved by cannabis purists, solventless products are picking up fans among THC and CBD shoppers looking for a whole-plant experience with all terpenes intact.

But solventless extraction is notoriously slow and labor-intensive. Extractors say the sector is getting bigger because of three factors:

Demand for solventless products really took off after the 2019 vaping crisis, when additives in vapes made mostly from flavorless THC distillate with added artificial flavors were blamed for dozens of deaths and 2,600-plus hospitalizations. 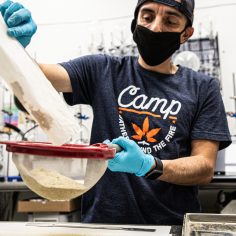 “People want to put things into their body that are not harmful,” said Aaron Nino, director of production for CAMP, a concentrates division of Nevada cannabis retailer The Source.

His company’s solventless sales tripled in the months after the vape crisis.

Solventless products are contributing to the rise of the concentrated cannabis sector overall, up 17.6% between 2020 and 2021 in five recreational states, according to cannabis sales analytics tracker Headset.

And while many concentrates made using hydrocarbons have seen prices drop 50% or more in the last three years, retail solventless products still hover at $100 a gram in many markets.

That consumer demand is changing the economic decision-making for extractors, said Darwin Millard, a longtime cannabis consultant who lives outside Toronto and is now chief science officer for Final Bell Corp., a cannabis ingredients manufacturer.

“You’re having more people willing to pay that high-end dollar value for the solventless SKUs in order to make them commercially viable for the manufacturer,” he said.

“We had hashes and mechanically separated products before, but you just couldn’t compete on the manufacturing costs to make a gram of solventless versus something you could just blast with butane really quickly,” Millard said.

“But that kind of all changed because of the consumer desire for terpenes and people becoming more and more educated as to the quality of the product.”

Still, solventless extraction is a significant investment. Extractors in the sector say to budget six or even seven figures for equipment.

“You can do a really nice product with some bubble bags, a trash can, some ice and some water, and some sort of hot rosin press or something like that,” said Nate Ferguson, co-founder of Jetty Extracts in Oakland, California. “And we’re seeing a lot of small-scale operators doing this.

“But it’s six figures for equipment, if not more, if you really want to make a dent in the California market.”

“We went from using small portable washing machines and doing batches by hand to very large-scale commercial applications. The equipment has really come a long way.”

“The majority of strains won’t even work,” Ferguson said. “You have to do a lot of phenome-hunting to find the right one.”

But just as in the equipment marketplace, extractors are seeing more offerings for cultivars designed for solventless extraction. Those cultivars are still more expensive, but prices are coming down, in some markets down more than 25% in the last couple of years.

Another upside to solventless production is a safer workplace for extractors. The lack of butane or other flammable solvents can reduce the health-and-safety protocols demanded by high-volume chemical extraction.

“Using rudimentary and relatively simple techniques in order to create the same types of products that require (Class 1, Division 1 lab designation) with hydrocarbon (extraction), you can simply avoid it and produce the same crazy high-end aesthetic quality product, which can fetch that high connoisseur dollar,” Millard said.

On the other hand, solventless production facilities have distinct temperature-control requirements. And solventless extraction at scale can require large volumes of ice and cold water, requiring specialized water service that may not available everywhere.

Several solventless extractors said the style of production makes most commercial sense in a from-scratch lab.

“You may not need a room that’s 45 degrees in your hydrocarbon production, but here you do,”
Tanem said.

It’s a concern that has solventless extractors prioritizing the need to educate consumers on the value of slower but cleaner production.

“We’ve made sure that we are educating our consumers of the benefits. It’s not about high-THC, it’s about how cannabinoids and terpenes are working together to create an experience,” Nino said.